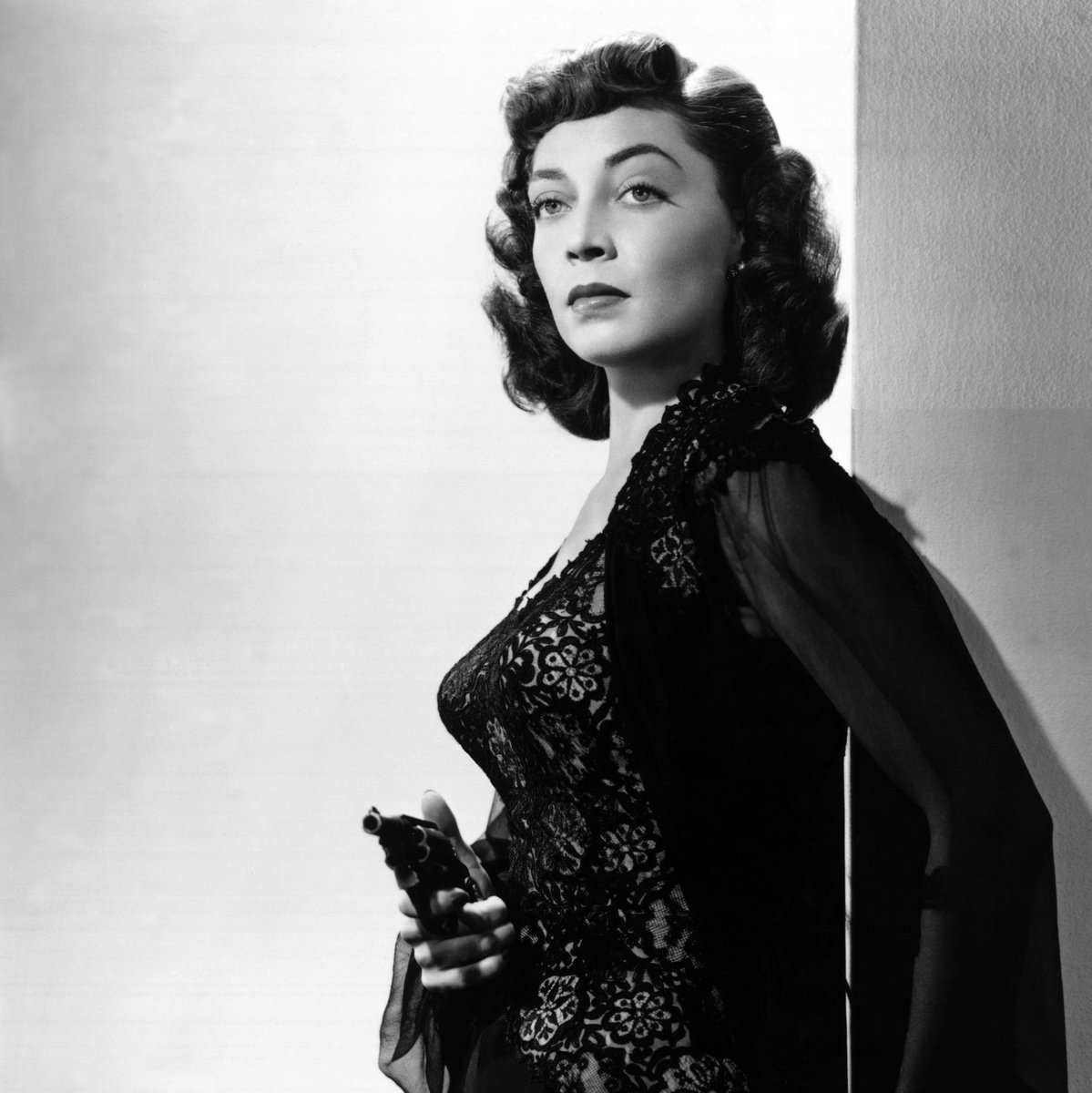 The single light bulb of interrogation now shines on Marie Windsor as Mrs. Frankie Neall in the model B classic picture  THE NARROW MARGIN (1952).  The  subject is the  Femme  Fatale.  The term Femme Fatale is defined loosely as “a mysterious and seductive woman whose charms ensnare her lovers, often leading them into compromising, dangerous, and deadly situations.”  Film Noir is a literal breeding ground for this type of woman ranging from Lizabeth Scott (TOO LATE FOR TEARS), Jane Greer (OUT OF THE PAST), Barbara Stanwyck (DOUBLE INDEMNITY) and personal favorite Claire Trevor in BORN TO KILL.    THE NARROW MARGIN (1952) features one of the best both for  venom and poignancy. 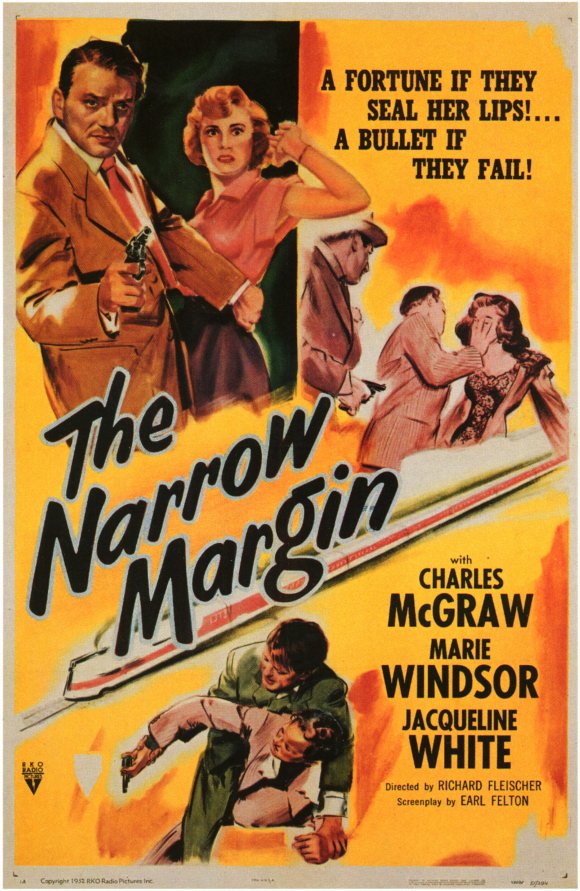 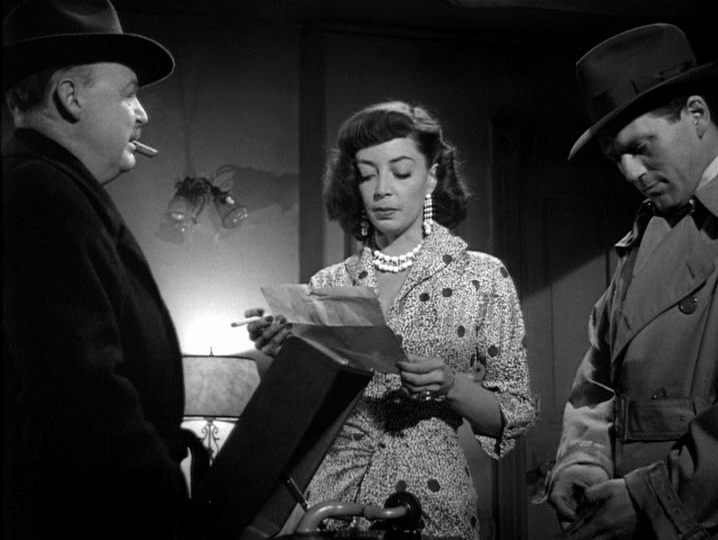 To have one actor shine you must have a second actor doing their job well. It is a give and  take situation with actors; letting the other have  a moment.  In film, that becomes the  closeup or not making movement to steal a scene. Charles McGraw as Det. Sgt. Walter Brown plays brilliantly  with Marie Windsor as wife of hood Frankie Neall whose testimony is needed concerning  pay off operations. Mrs, Neall carries her late husband’s secret  list and since it contains important pay off names, naturally, certain parties will do anything to stop her from getting to her destination.  Sgt. Brown is reluctantly pressed into protecting her solo on a  train trip after his long time partner Sgt. Gus  Forbes (Don Beddoe) is gunned down on the stairs of a  tenement house during Mrs. Neall’s pick-up to the station.

Charles McGraw, in his trademark growl,  gives the character of Mrs. Frankie Neall one of the best intros to a character in all of the genre: even before the audience meets her.  Driving to the initial meeting, Sgt. Brown (McGraw) remarks that he already knows what she is like before they see  each other.  His partner (Beddoe) is mystified by Brown’s ‘special power’ since no one has met her yet.   Testy Sgt. Brown tells him that, “She’s the sixty-cent special. Cheap. Flashy. Strictly poison under the gravy.”  This rich line sets  up the audience for what is to come. 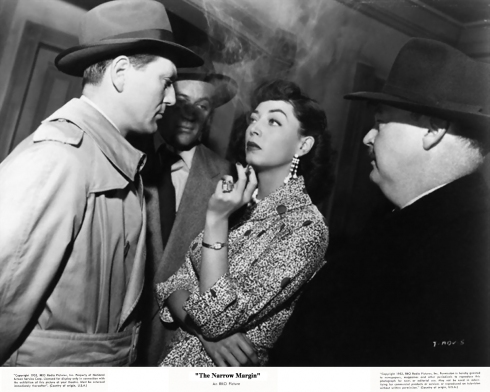 The policeman guarding Mrs. Frankie Neall is relived to get away from this duty.  Forbes asks if the music they hear is for welcome. The policeman says  “YUu don’t know how welcome. Turn that thing off.  Your escorts here.”   Director Richard Fleisher cuts to a shot of the figure looking up from the phonograph with  the requisite dangling cigarette and with smoke rising she moves to the men.  After an introduction that they are from Los Angeles,  she says, “How nice. How is  Los Angeles?” then looks at Brown and blows smoke in his face asking if  his “sunburn  wore off,” giving him a lingering smirk stare.

Mrs. Frankie Neal is dressed in a tight, white, patterned party dress which shows off Marie  Windsor.  She has the classic dark hair of the  evil woman in Victorian literature with a very  expressive face with cheek bones and eyes that will give you that “thousand yard stare” or  put you into more pleasurable pursuits.  Mrs. Neall argues  that she can pack her own things and is reluctant to go with them since  she is “taking a big chance.”  She is an independent woman who will not easily go with anyone or anything.   She even lets the list drop instead of placing it in Sgt Brown’s out stretched hand in another mark of contempt for the proceedings; yet she knows  she has to go. 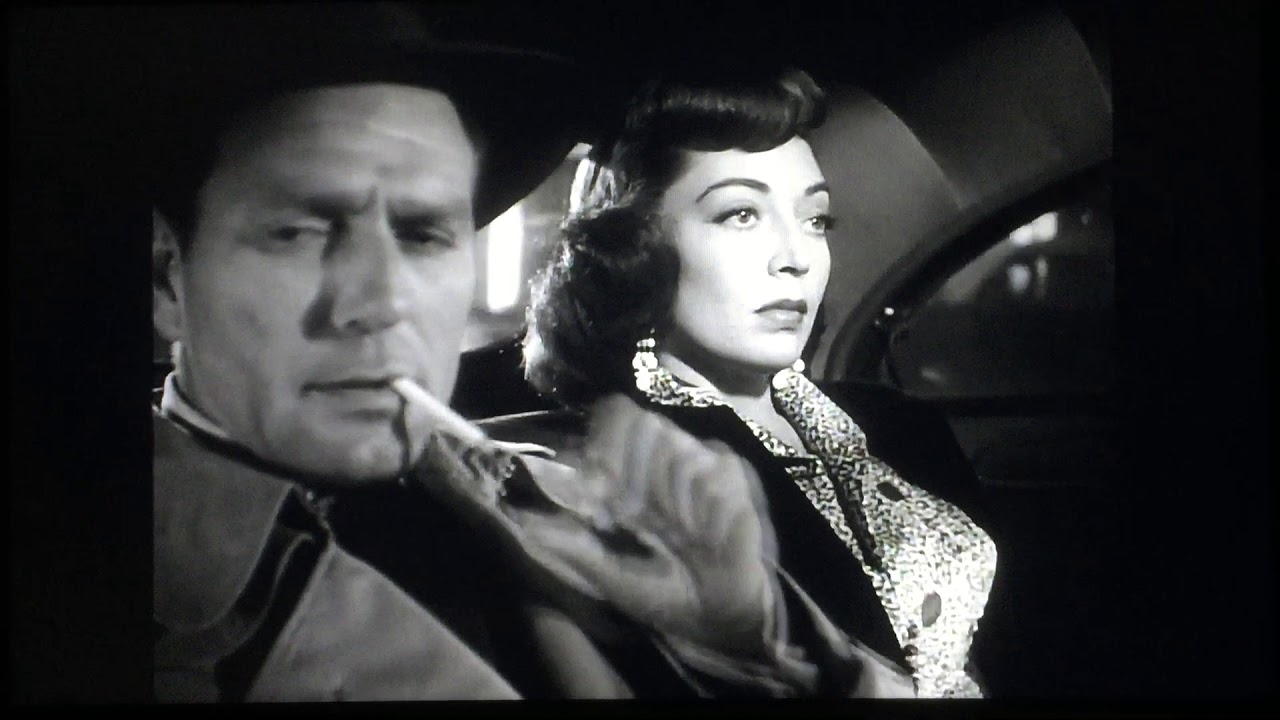 The plans change with the  death of Sgt. Brown’s partner. On the train the two become travelling husband and  wife. Sgt. Brown and Mrs. Frankie Neal snipe at each other in the car going to the train as Brown wonders what he will tell Forbe’s wife.  Hard as nails Mrs. Frankie Neal says, “It’s fine  protection an old man who walks right into it an a weeper.”  No sentiment at all, only her life and getting to the destination.  Once on the  train, the two become dependent on one another. More so  when they find that one  of the killers is on the  train.   In many of the scenes Brown and Mrs. Neal  are so close  they could smell each other’s  breath, undoubtedly due to the small sets of this  B  picture plus they are in a train compartment.   Still, that proximity makes it possible for  a hint of romantic  entanglement which may or may not happen. 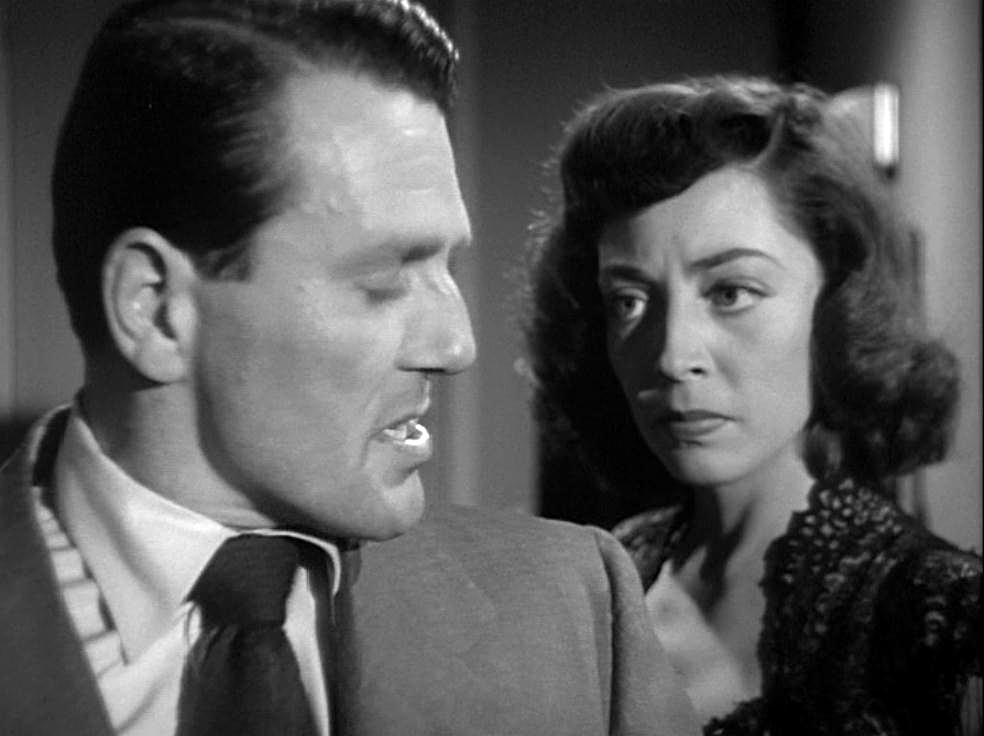 Brown wants Mrs. Neall to stay out of sight in the compartment. This forces him to bring her food and relieve her boredom.   Playing the portable phonograph and  playing solitaire are her only amusements.   Mrs. Neall doesn’t dress to  not attract attention either as she attires herself in a black (almost) peignoir type  gown and  jewelry .  This is a  woman not comfy with hiding or being told what to do. She is accustomed to standing up for herself and undeniably told to look beautiful to be  on the arm of a mobster.   Neall is accustomed  to being the center of attention, hence she  gives it  to Brown verbally when he meets  assorted characters and blonde  train passenger Jacquelyn  White (Ann Sinclair) and her precocious  son in the  dining car. This delays Brown bringing back her meal.  She is none too happy about the delay.

Subtle moments  of  jealousy on the surface from  Mrs Neall toward Jacqueline  White and Brown’s involvement  with her.  Is it  a reflection of  a love/hate or  in this case  to keep the focus on  herself and the business  at hand?  The killers are on the train and they know where she is. They will make a move as the destination gets closer and times more desperate.  The change of heart, a change of direction, identities  revealed,  and a desperate reach inside a closet all come into play in something that is not  what it seems. 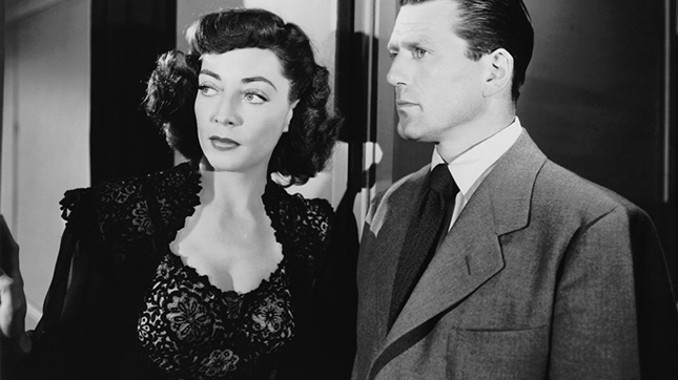 Marie  Windsor is towering in THE NARROW MARGIN (1952).   She invests the role of  Mrs. Frankie Neall with a desperation and purpose which may seem over the top at times.  She is a  flirt with men; especially Brown, and  ready to flash those eyes in any direction.  She is proud and wants to live most likely more than ever, yet she draws  both Forbes and Brown into her orbit, leading to tragedy. 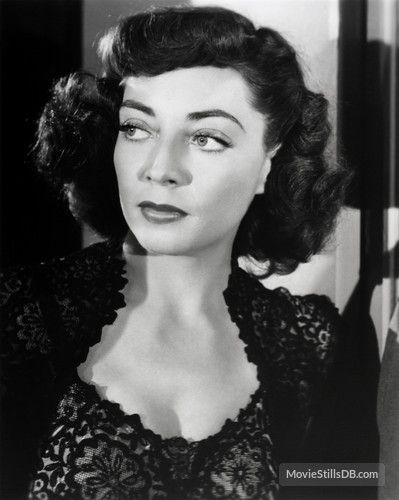 Marie Windsor, who was born Emily Marie Bertleson, was  in many noir and B pictures. She became  their queen, much like later fifties science fiction queen  Beverly Garland. Windsor  is  variations of the  role, but none quite hit the temperature of Mrs. Frankie Neall, due to the fact she had the brilliant Charles McGraw to play against in scenes of  venom and caustic cynicism. Brown and  Mrs. Neall  are classic trapped’ figures moving literally toward a fate. 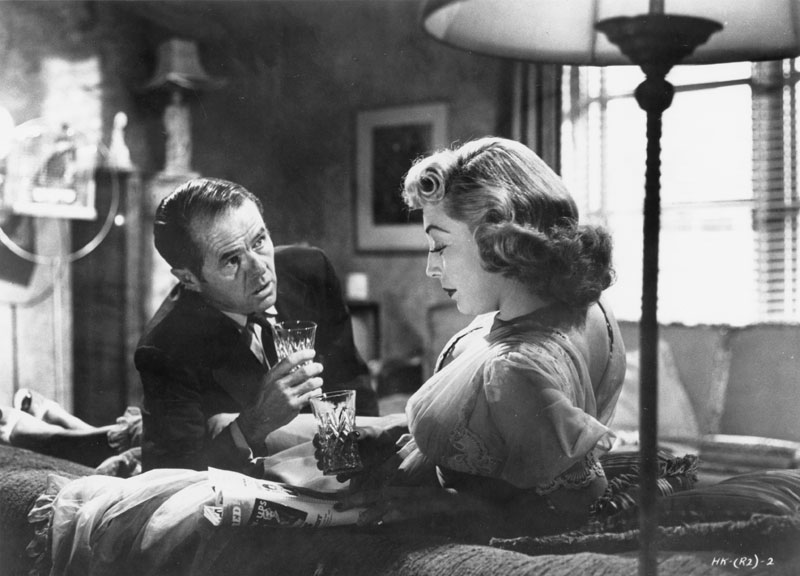 The closest Marie Windsor  id  get to this level was as the  scheming wife  Sherry Beatty with eternal fall guy Elisha Cook Jr. in Stanley Kubrick’s  THE KILLING (1956). 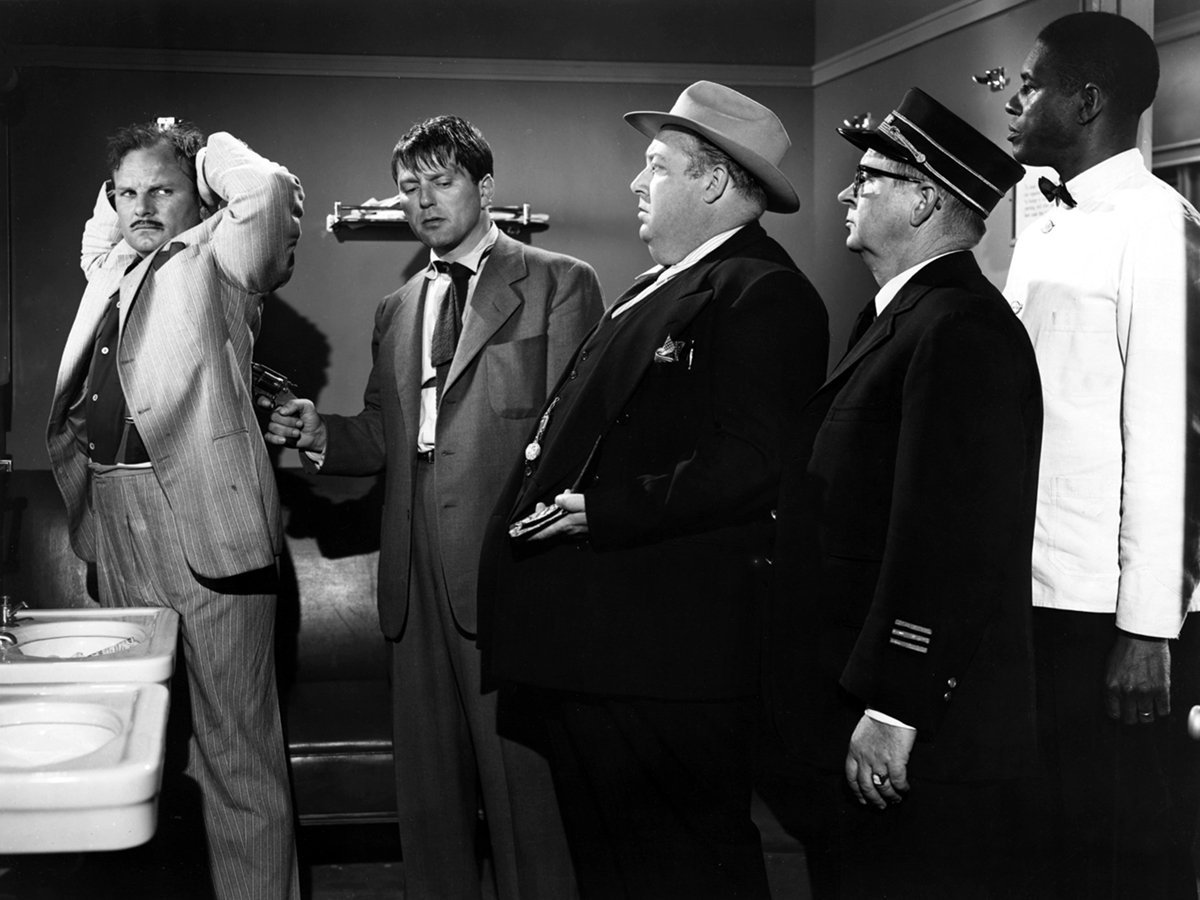 THE NARROW MARGIN (1952) is all the more richer  for the work of Charles McGraw, Marie Windsor, and  a host of characters that move  in  and out of their influence. Brown has punch-ups similar to those in the James Bond picture FROM RUSSIA WITH LOVE (1963), and absentmindedly going in the  wrong sleeping berth to having  Jacqueline White’s child spot his  gun in his jacket.  It is all part of this trip with killers on the loose.  Every train must reach its destination and this one  does at a station in a way few would expect. 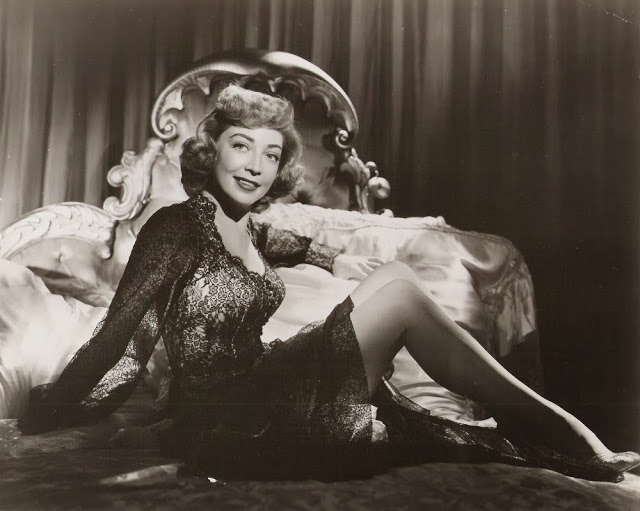 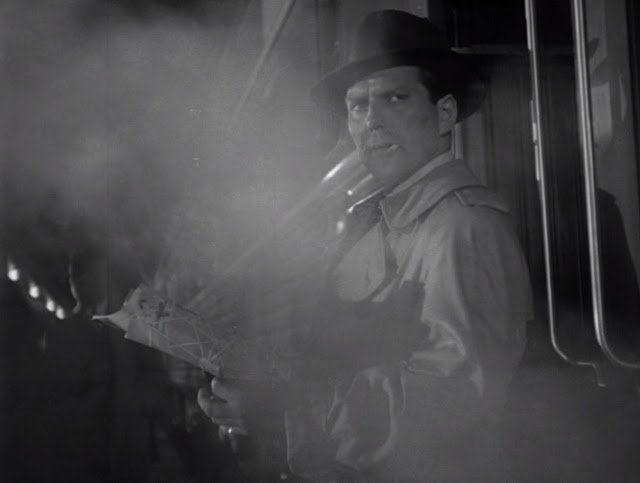