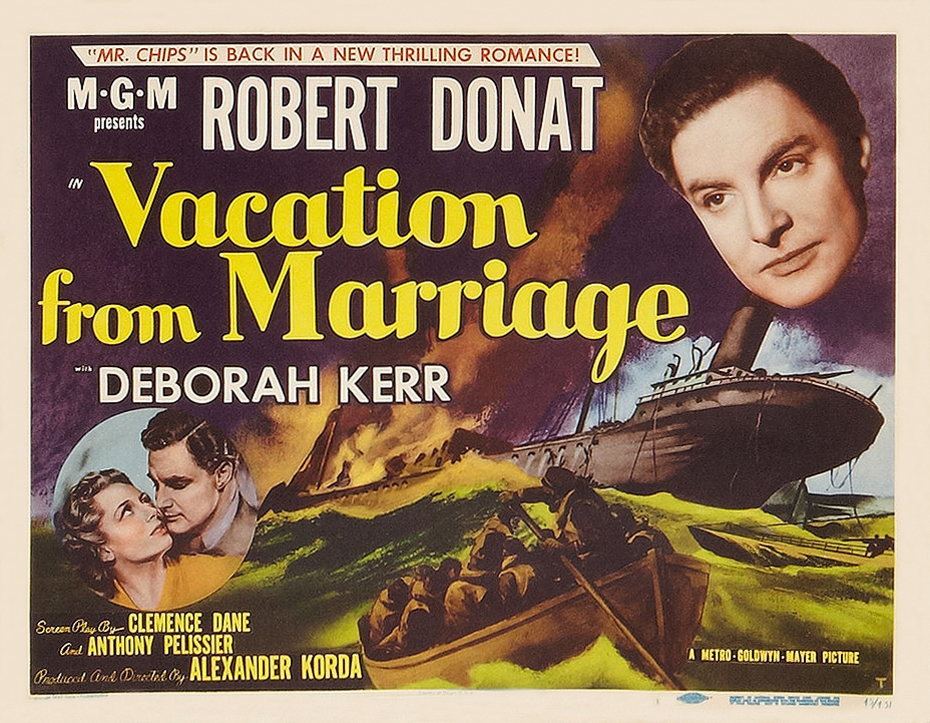 The scope of large events such as war can be hard for people to grasp. History is usually  written by the victors.  Hence,  VACATION FROM MARRIAGE (1945),  in the  USA (A. K. A.  PERFECT STRANGERS) presents the watcher with a low key, intimate view of ordinary people who undergo a personal  cataclysm.    The picture was directed and  produced  by  Alexander Korda, using  Metro’s  U.K. production facilities. This in and of itself gives the film a different look; best characterised as a portrait of a married couple that you look at  with some indifference, till you notice  a humanity and  vulnerability. 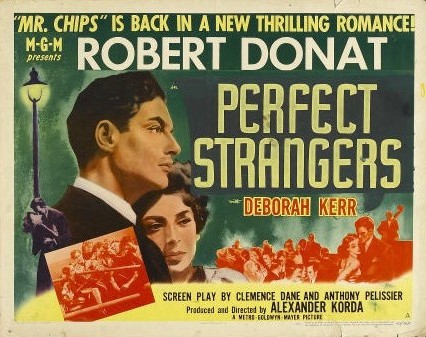 The script was  penned by  Clemence Dane, who won an Academy award for  the original screen play from his story,  with help from Anthony Pelissier.   Mr Pelissier was an actor in the thirties with perhaps his best writing credit  being  THE ROCKING HORSE WINNER (1949). 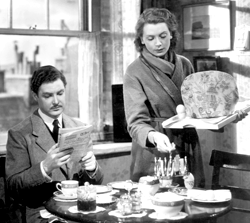 VACATION FROM MARRIAGE (1945) tells the story of  a ordinary,  drab couple named Robert and Cathy Wilson, who  join the military in England. Robert joins the Royal Navy and Cathy is called up by the Wrens.  The picture follows their exploits to the  end when they both decide that  they no longer want to be married.    This plot may seem similar to many romantic war time pictures, however, the sheer subtlety of the story, the  brilliant acting, and, in  the best cases,  non-acting, make film this a  treat.

Robert Wilson is played by Robert Donat, who had  great success in the title role of  GOODBYE MISTER CHIPS (1939) and the  classic THE 39 STEPS (1935).  Mr. Donat perfects the regimented  English man building on his  role as ‘Chips.’  Wilson has  the same breakfast each day, checks the barometer by tapping it,  and receives his  umbrella from Cathy on the same arm.   Donat  is a combination of  Alec Guinness and Peter Cushing, both ‘masters of props;’ creating little bits of business for their role that is not in the script.  This creative process takes disciplined  indulgence by a  director to allow it  to happen and be seen in the final print.  Although usually a hallmark of theater actors,  a few film actors of the time had the ability to do small things that we remember,  such as the James Cagney walk and shoulder shrugs.  Humphrey Bogart’s hand placement held like a ‘rat’ in front of himself as Duke Mantee in THE PETRIFIED  FOREST  (1936). Modern examples would be  Warren Beatty repeatedly  flipping a single wooden match in his mouth as he is baited by Faye Dunaway  in BONNY AND CLYDE (1967).

Actors prosper in a role when they are given something to play against.   Strong acting is the battle of  give and take in a scene or  a moment. Often, it is body position, movement and  “acting still,” which is hard to do.  This gives the other actor the moment that can be crucial to a  story. Spencer Tracy spent a  key  scene with his  head  down, saying dialogue with Ernest Borgnine standing almost over him in  BAD  DAY AT BLACK ROCK (1955) and  takes the scene in a  subtle way. 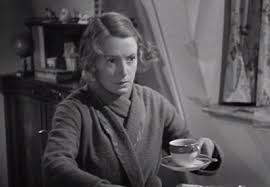 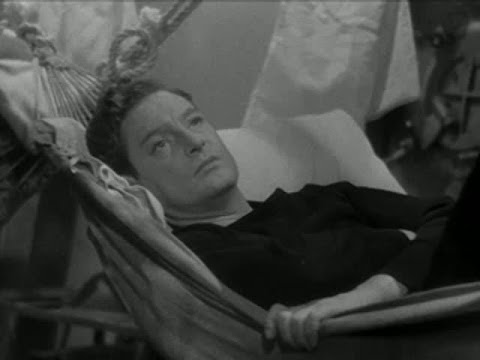 Cathy Wilson is played by Deborah Kerr in her M.G.M debut. Cathy caters  to Robert by not wearing lipstick or makeup. 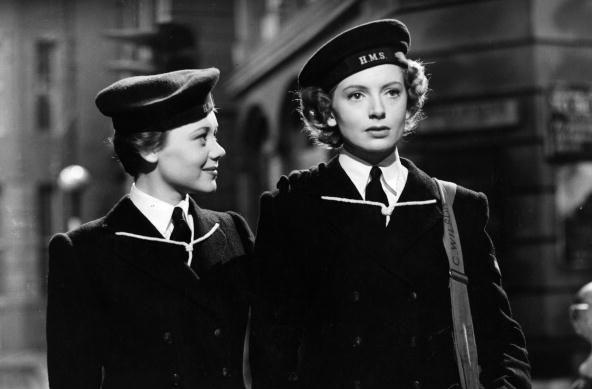 She  even remarks  to a  new female friend in her barracks,Dizzy Clayton (Glynis Johns) that she won’t  smoke because Robert doesn’t like it.  Robert and Cathy are trapped in their own routines with his being the office and hers being their apartment.  They suffer  disappointment when an expected  bonus of having Robert’s service salary possibly being topped  up by the accounting firm he works at; only to find he is several months short of the cut off.   The managing director states, “A rule is a rule.” 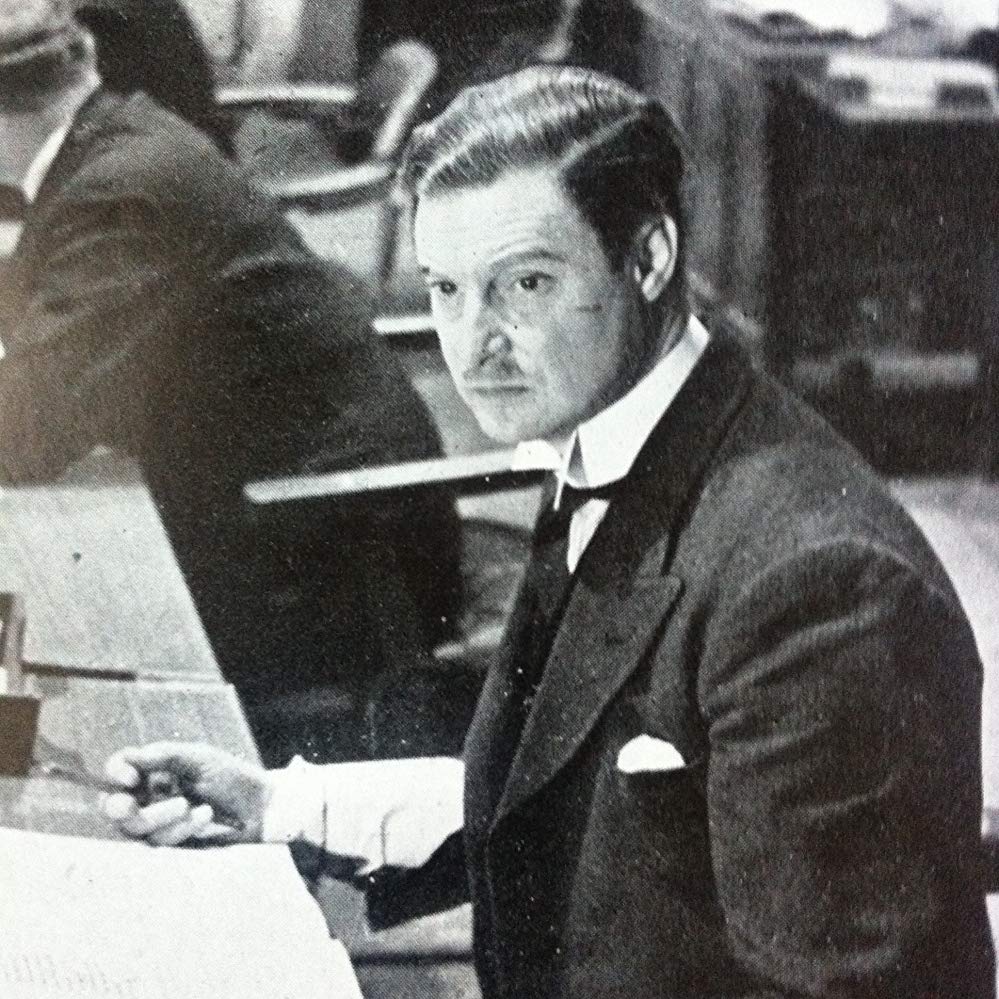 Cathy and Robert grow in different directions as  they meet other people.  They both find  lonely people in their own way such as  Robert meeting Elena (Ann Todd),  a  widowed nurse with whom he learns to dance with . 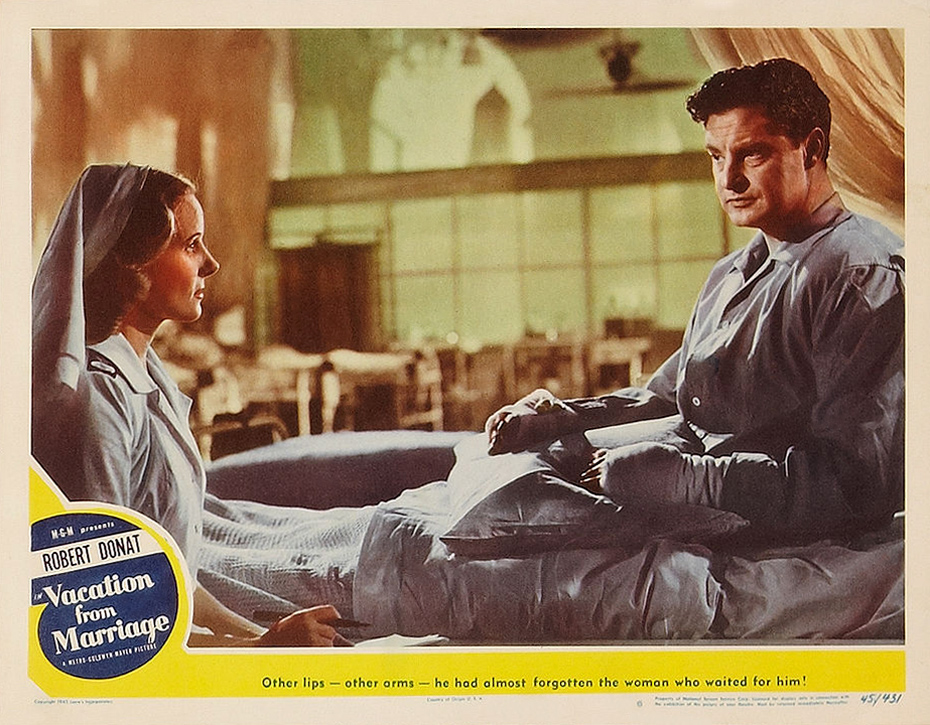 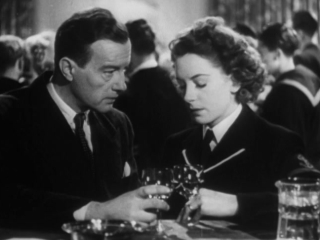 Cathy meets and  goes out socially with  a man called Richard (Roland Culver). Richard is an engineer who draws and sketches, has anecdotes and  take her  on picnics, knowing she is married. 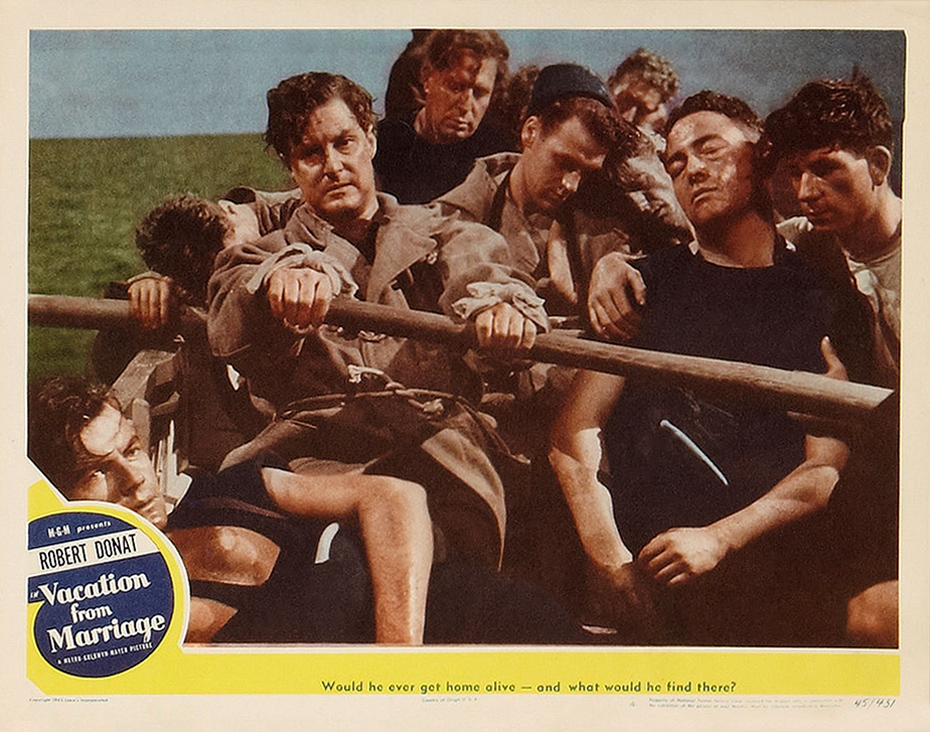 The military service  changes them as  Robert goes  from being a sea sick newbie who can’t eat to a Petty Officer.  Cathy dances, wears  lipstick , changes her  hair style and  smokes.  She also goes on dangerous messenger duty in a  small powerboat under  fire to deliver a  military order when radios  fail. 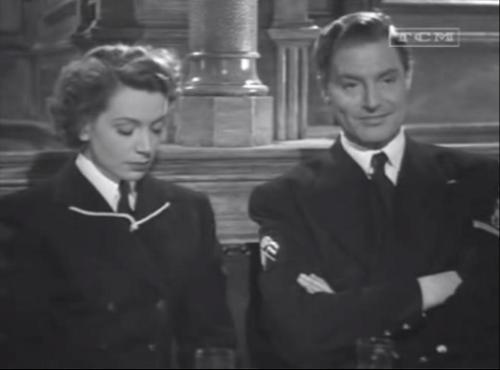 The two get a  ten day pass to meet  for the first time in several months.    Life can change you and it does not have to be a war.

VACATION FROM MARRIAGE (1945) features effective battle scenes especially at night and aboard  ship.  One gets to see  the details of life aboard such as  hammocks above the  mess table. 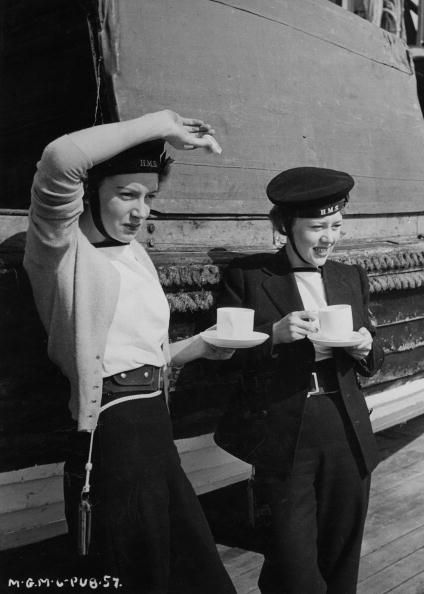 The uniforms  worn are  correct  down to the decorations,  and cap and uniform patterns for both men and women.  Women wear pants in this film along with  a tunic and cap to sail.  You get a warmth from the people in the picture as  they joke  and interact with personality that could be caricatures meant to boost morale. 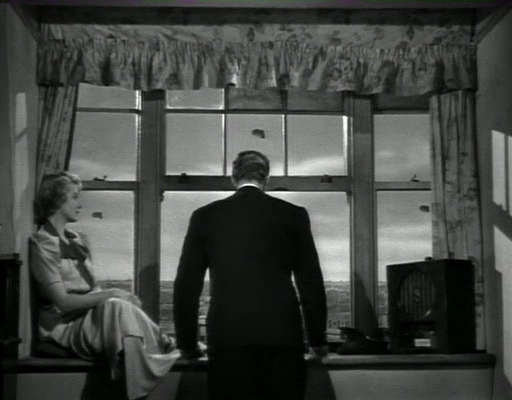 VACATION FROM MARRIAGE (1945) is effective as  you watch the subtle change of Cathy and Robert, and those around them.  Humphrey Bogart as  Rick Blaine in CASABLANCA (1942)  once  said

I’m no good at being noble, but it doesn’t take much to see that the problems of three little people don’t amount to a hill of beans in this crazy world. Someday you’ll understand that. Now, now… .

The troubles of  two little people  are wonderfully handled  in this picture  with tour de force acting bringing a  world of  one couple to  life and change.