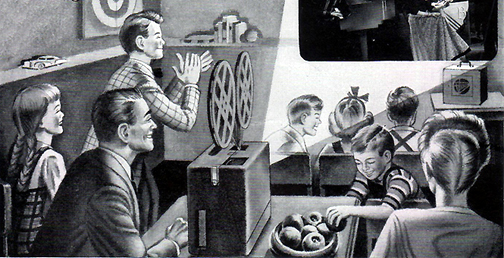 When you have your PVR loaded with holiday film fare  or you pop in your favorite  disks in what ever format you choose for yourself or guests; just cast your mind back to another way to watch. When PVR was still the “stuff dreams are made of,” those of us that wanted to see a certain style of film had to wait for these pictures in the theaters. Read about them in various magazines which contained those studio stills. Later one would scan the TV GUIDE or equivalent publication that we would buy each week or came with the local paper for our favorite titles and stars. In between-for those lucky enough to have the resources-were companies that sold copies of films in 8 mm, 16mm and later Super 8 formats for home viewing. This was the entry point for some for which film became a serious hobby and launched careers.

Super 8 and 8 mm were available through the mail from companies such as BLACKHAWK FILMS, KEN FILMS and CASTLE FILMS.   BLACKHAWK FILMS was founded in 1927 in Galesburg, Illinois by one Ken D. Eastin who made local advertising films for businesses, shot news events for Newsreels and sold independent 35 mm prints for home projectors. When 16 mm sound happened in 1937, Eastin moved out of his parents’ house and set up shop in Davenport, Iowa.  He operated a rental business till 1957 when film slowed due to the advent of television. Eastin took on a business partner, Martin Phelan, who had a background in direct mail and management.

BLACKHAWK FILMS began producing a monthly newsprint catalog listing its releases for purchase in 1947 and continued up to 1981.  Consumer interest grew in the products from Hal Roach studios, authorized editions of the Keystone Comedies and railroad films of the vanishing era of steam; of which Eastin was a lifelong fan.  Soon more vintage comedies, dramas, westerns, documentaries, and cartoons were added.  The staple items were always the great silent epics and stars of the day plus rare pictures made to order in the 8 mm gauge for home viewing. BLACKHAWK FILMS changed with the times when Eastin and Phelan sold to Lee Enterprises, and began selling Betamax and RCA video disk formats via mail order. The company again changed hands in 1981 to National Telefilm, and renamed REPUBLIC PICTURES. It closed completely in 1987. 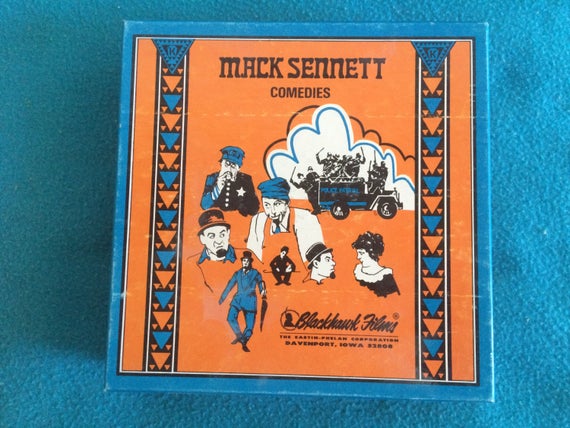 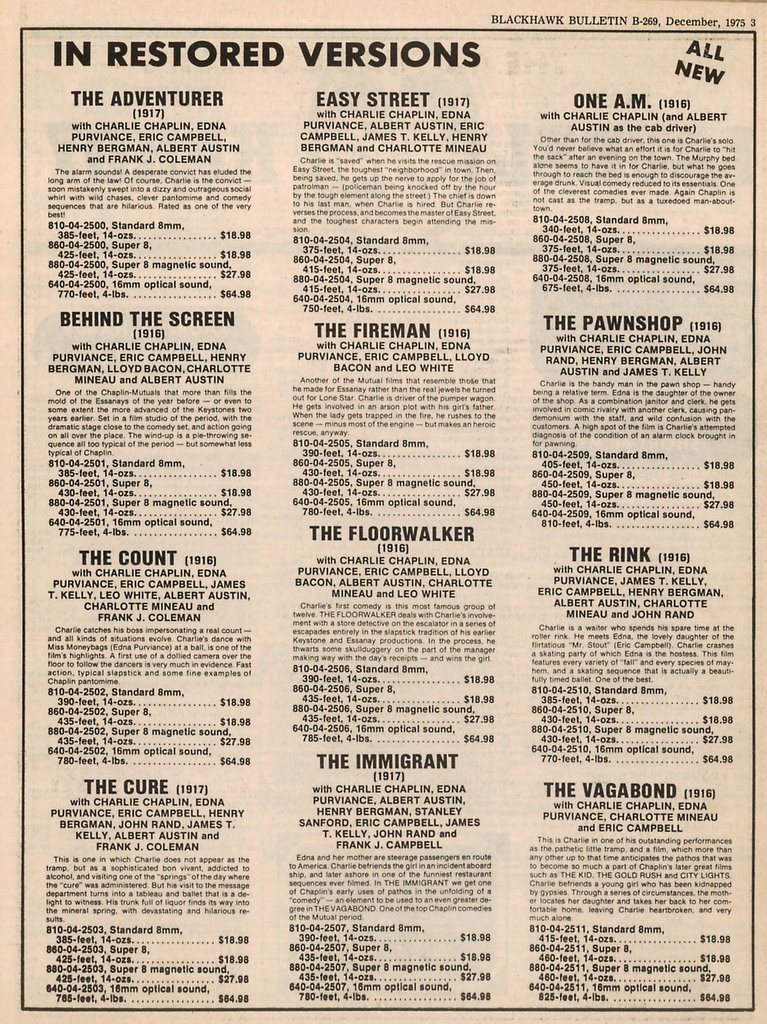 I remember getting on the mailing list for the monthly newsprint catalogue for BLACKHAWK FILMS. Each month I would leaf through the paper, read the stories and look at the pictures; never daring to order as I recall it was around 200.00 dollars for a print of something like BIRTH OF A NATION in Super 8. The company I did have the most contact with since I was interested in horror films was CASTLE FILMS.  You could read the advertisements in the back of FAMOUS MONSTERS OF FILMLAND magazine and wonder why they never would ship to Canada. One day they started shipping to my country of residence – opening up a whole new world.

CASTLE FILMS was founded in 1924 by Newsreel camera man Eugene Castle, who produced advertising and business films in California. In 1931 the office moved to New York City, branching out into 8mm and 16 mm films for home use. The first home movie Castle shot was the Hindenburg explosion, progressing to NEWS PARADE, followed by sports films, animal adventures and old time movies. In 1947 United World Films (which was related to UNIVERSAL STUDIOS) purchased a stake in CASTLE FILMS. This gave it access to its vault of pictures – the comedies of ABBOTT AND COSTELLO, THE HORROR FILMS, plus the products of Walter Lanz Animation studios (Woody woodpecker, Andy Panda, Oswald Rabbit and Chilly Willy Cartoons). 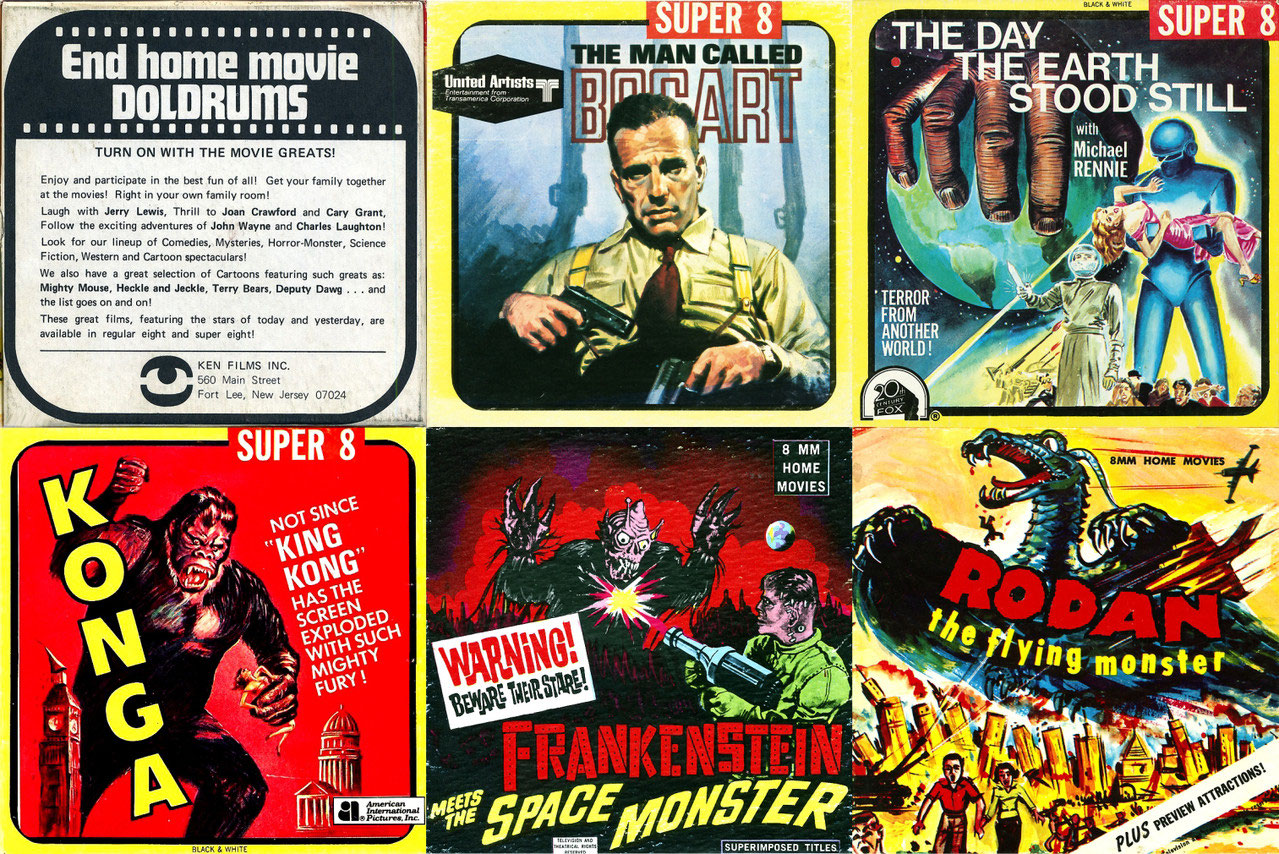 When MCA purchased UNIVERSAL in the 1960s, CASTLE FILMS gained access to the pre 1950 PARAMOUNT PICTURES sound pictures that were owned by MCA’S television division.  You had pictures like the Hopalong Cassidy series, Marx Brothers films and work by Cecil B De Mille.  Even NASA footage of space fights were available for the home projector.

KEN FILMS had a different approach to selling film to the home consumer by actually having their product in department stores. KEN FILMS worked out of Fort Lee, New Jersey, which did not stop them from having film boxes for sale in Canada in places like Kmart. KEN released silent digests of American International Pictures horror films and cartoons, along with a number of Warner Brother’s titles. 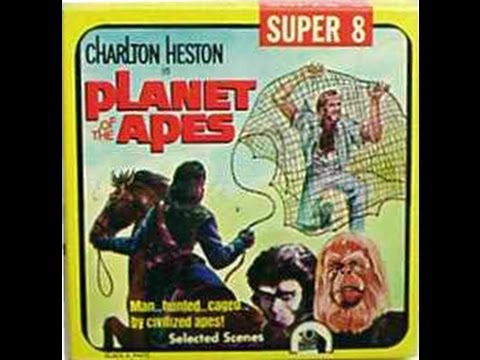 In 1973, KEN signed a deal with Paramount to release a large number of 200’ and 50’ silent versions of some of their most popular features, starting with two parts of “The Greatest Show on Earth”, “The Ten Commandments” and “Samson & Delilah.” KEN FILMS made the big jump into color and sound in 1974 with 200’ versions of all 5 “Planet of the Apes” movies.  They also put out a large number of 200’ color/sound American International products during this period.  The highlight of the release of the 200’ color and sound was “Star Wars” while the film was still playing in theaters! 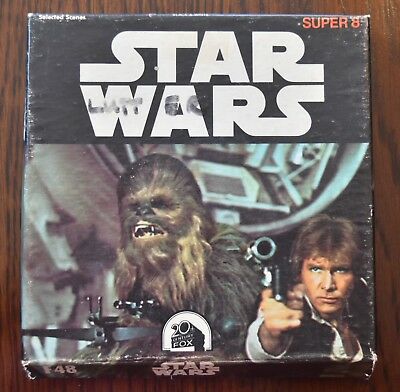 BLACKHAWK FILMS. CASTLE FILMS,  and KEN FILMS flourished in the between years of the home video revolution and the format battles between VHS and Beta.  It may seem quaint today as one can pretty much find anything on specialty channels and your personal PVR. I am sure we all have stories of trying to see film in those days before the tech.  For many, these releases were often the first time (apart from television and film society screens) that you saw the pictures you were interested in seeing.  A whole new world. 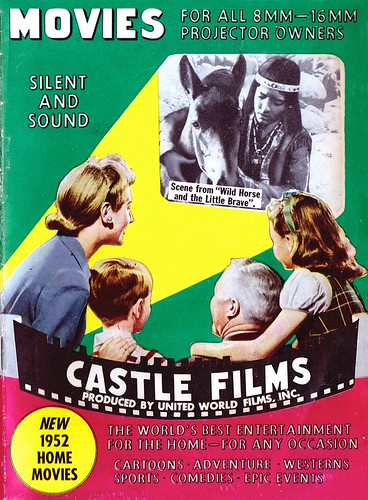