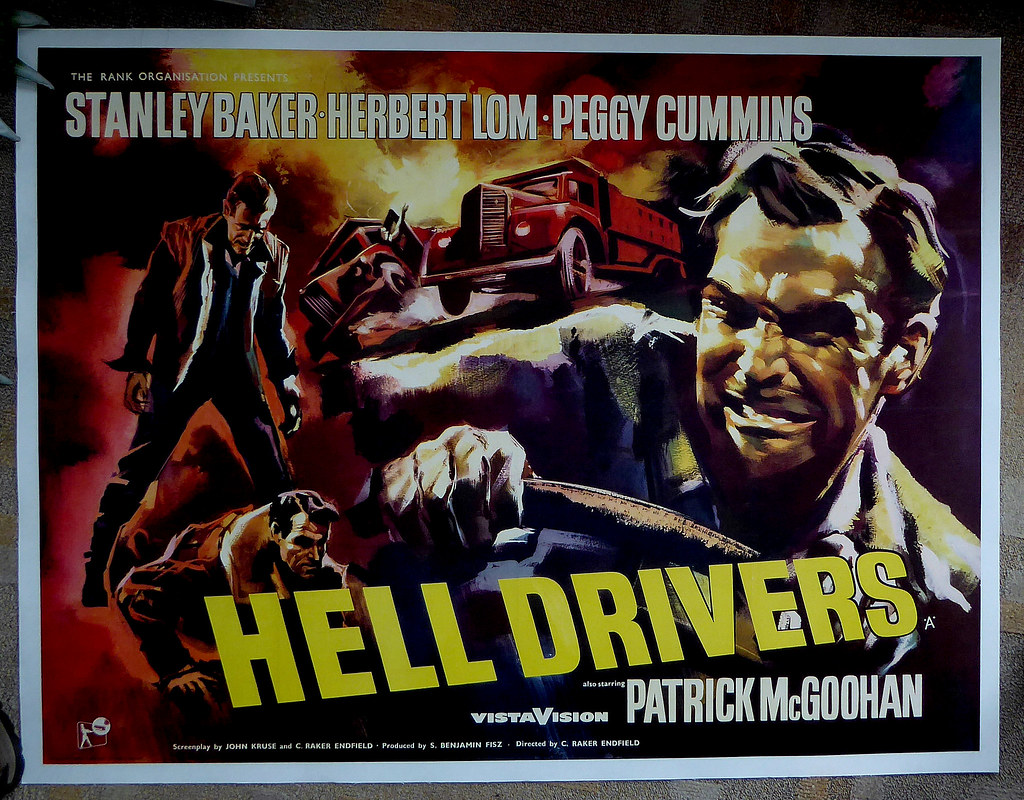 Truck driving has been a noble occupation in film as it makes for fascinating story ideas.  You can have material being smuggled, be it people or arm chairs.    Some of the best are ARMOURED CAR ROBBERY (1955), THEY DRIVE BY NIGHT (1940) and the tension filled classic THE WAGES OF FEAR (1953). Fruit, weapons, booze, or even whole vehicles can be hidden in the back of a big rig.  HELL DRIVERS (1957) isn’t quite as glamourous as that as the cargo is gravel. It is not the cargo that is the story but the way the drivers haul it and why. 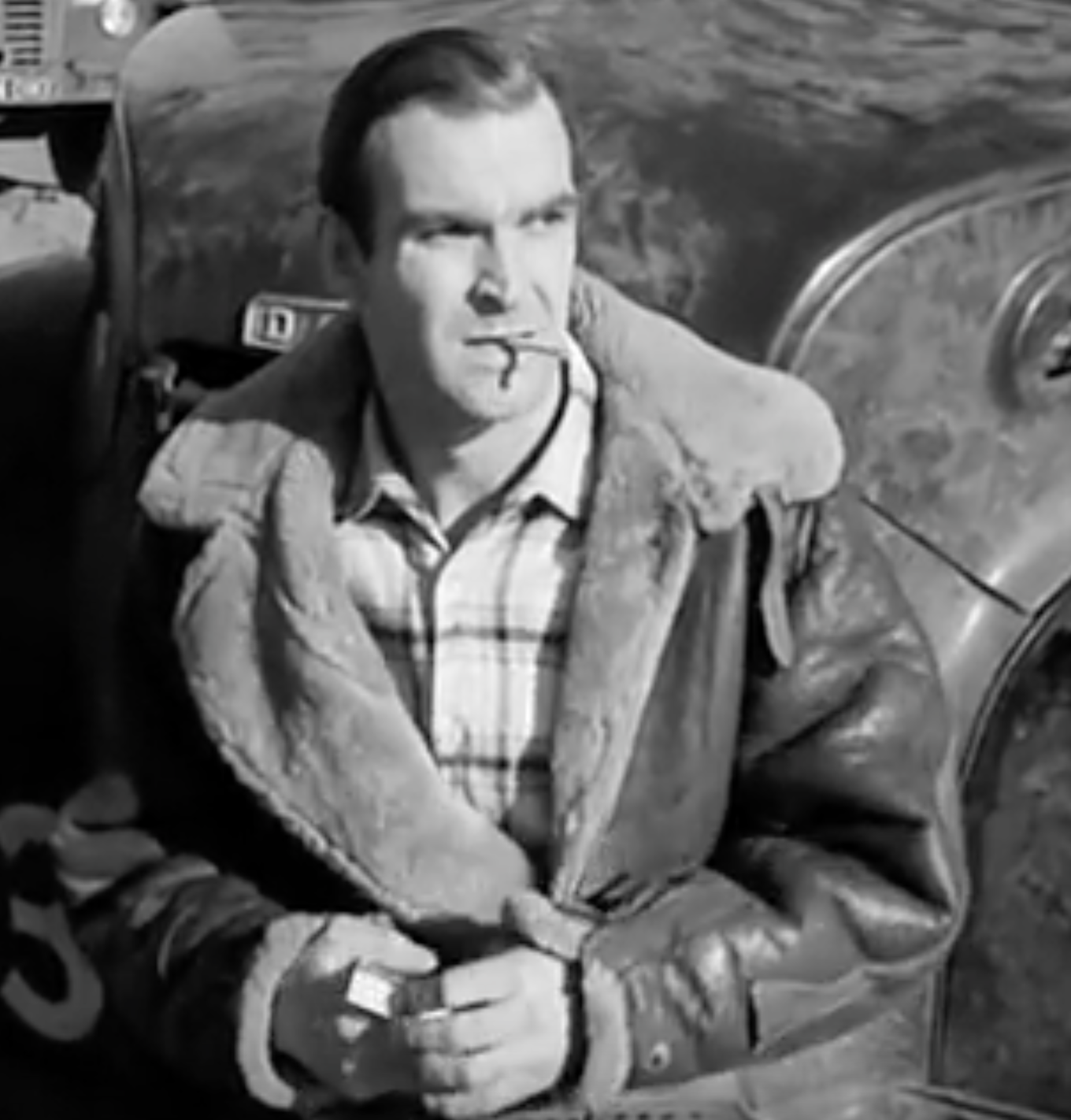 This British made picture is full of action and characters.    The star is Stanley Baker in his first lead role as ex-convict, Joe Yately, who finds a job with Hawletts.  Yately is trying to start a new life after prison and he heard money can be made in the business. He also knew a former driver who was killed on a run and assumes there is an opening. 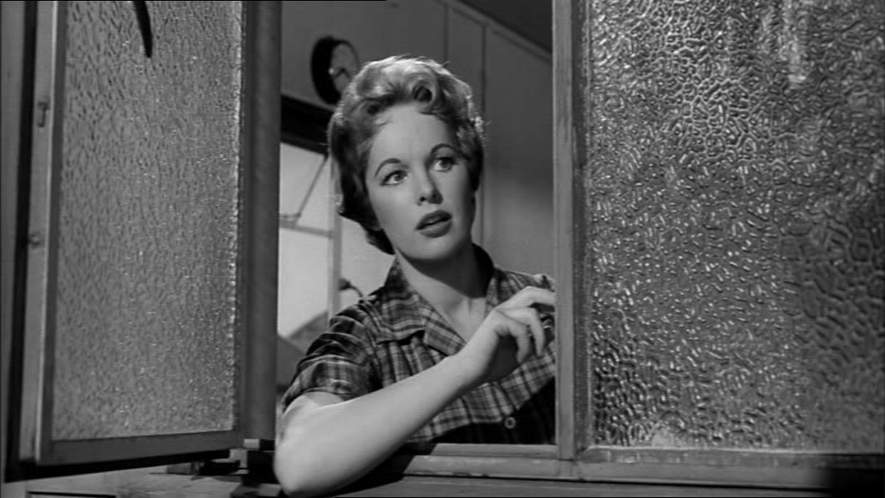 This is the postwar period, so Yately is attired in a flyer’s jacket and boots as he strides into the office to talk his way into the job after doing the same with the front gate person. The gate is never to be opened unless it is business (so the huge sign reads).   Yately attracts the eye of the office girl Lucy (Peggy Cummins), with whom he gives his name as being Tom. 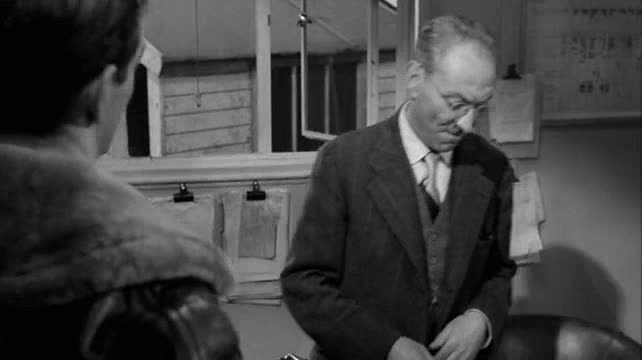 She introduces him to her boss Cartley, played with crusty perfection by William Hartnell.  Cartley says the job is driving ten ton dump trucks loaded with gravel fast over bad roads.   You are expected to do twelve loads a day or you are released.   Cartley is impressed enough to offer a test run to Yately which he passed with frightening results.   The effects seem dated but the high speed point of view shots and the turning into hedgerows, narrowly missing obstacles like people and vehicles are well handled. 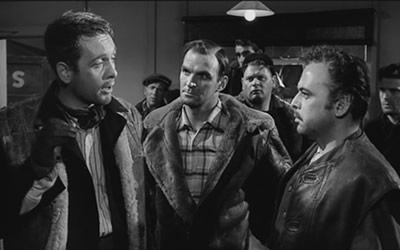 Yately, or Tom as he calls himself, gets the job and finds a place to begin the fabled new life.  The boarding house is typical working class British, complete with rowdy coworkers.  The thunder in a night, fighting in the hallways, except for Gino (Herbert Lom), who uses Tom’s room as a makeshift church where he sneaks away to pray as others “would not understand.” Tom learns that Gino is in love with Lucy in the office and the two of them head to the local bar where the others are, including the Irish foreman Red (Patrick McGoohan), who literally kicks the chair out from under him as he is sitting in his place at the head of the table. 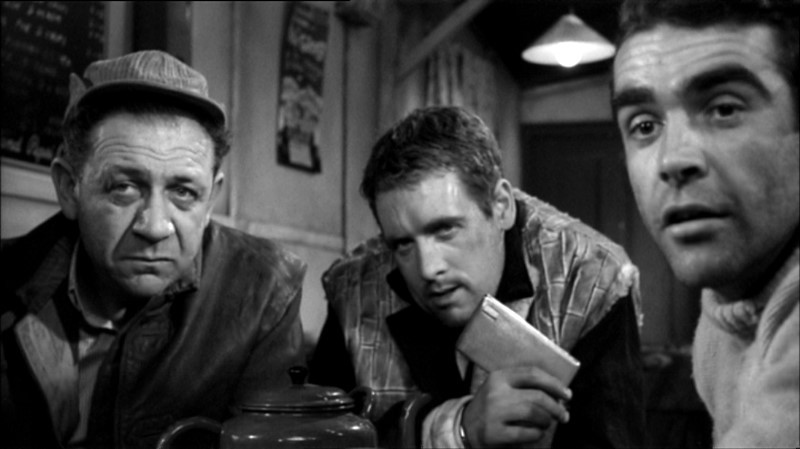 Red runs the show and is the best driver with the most runs to his name. He offers them a solid gold cigarette case to anyone who can beat his next day’s total.

There is a reason for Red being the fastest driver, and why the company has to be quick. The rivalries appear as fights and romantic entanglements grow moving, to a bloody climax and a sadness. 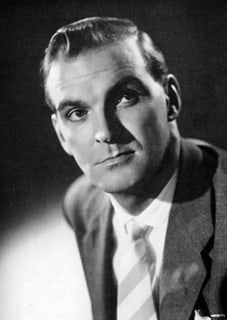 Stanley Baker shines as Joe Yately.   His looks and clear diction amongst all the accents is wonderful.  He moves with grace in the fight scenes and has the physical build for the role of a truck driver trying to make a better life for himself, but ending up in something he did not expect.  Baker does show acting chops in his vignette with his disabled brother Jimmy, who runs a local sweet shop.  Tom tries to give him money as it was his driving that caused the accident, only to be rebuffed by their mother (Beatrice Varley).   In one of the films best scenes, Tom and Jimmy’s mother angrily throws back the money saying that this is something they will have to live with for the rest of their lives.

I wonder why Stanley Baker was not tested or in the running for the role of James Bond as DR NO (1962) was still in the future. He has the look of Bond from the dark hair, the steel eyes, and the face of the literary Bond that leaves me pondering if he could not be called the lost James Bond.

I suspect prejudice on the part of the Bond producers.  Michael Caine in his documentary on sixties London and his career called MY GENERATION (2017), outlined that he was lucky to get the role of Harry Palmer and others at first because of his accent.  Caine was grateful that the film people looked past his Cockney accent. Perhaps the class structure of the time also played a part in Stanley Baker not being tested for James Bond, due to his Welsh accent. 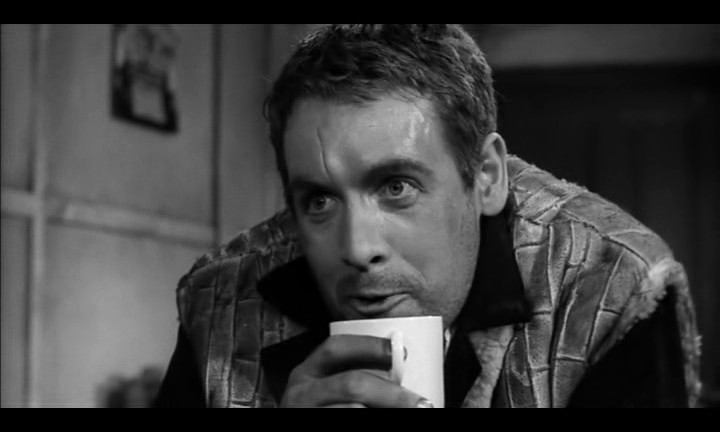 HELL DRIVERS (1957) is a veritable festival of actors that who go on to large projects. Patrick McGoohan goes onto THE PRISONER and DANGER MAN on television, as well as many films. He does well with the over the top, sleazy role of Red as he slams beers back, driving and grinning manically at other people’s misfortunes. 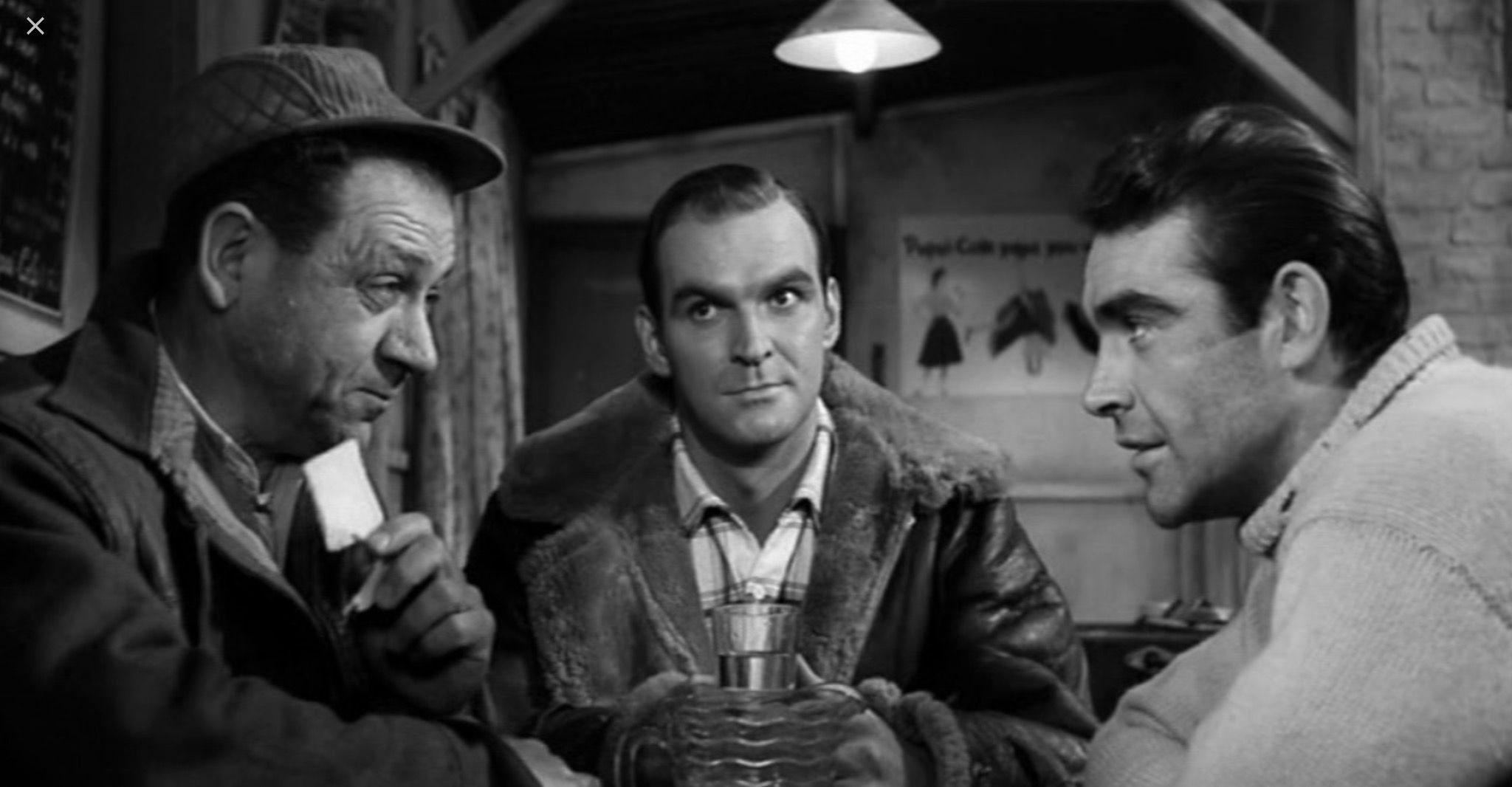 Sidney James, billed as Dusty the driver of truck twenty two, rose as a comedian in the CARRY ON film series. 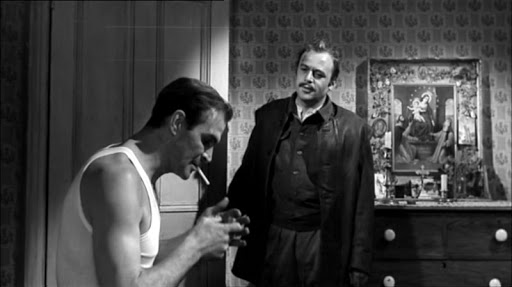 Herbert Lom continued into genre films and came to be known as Dreyfus in the PINK PANTHER franchise. 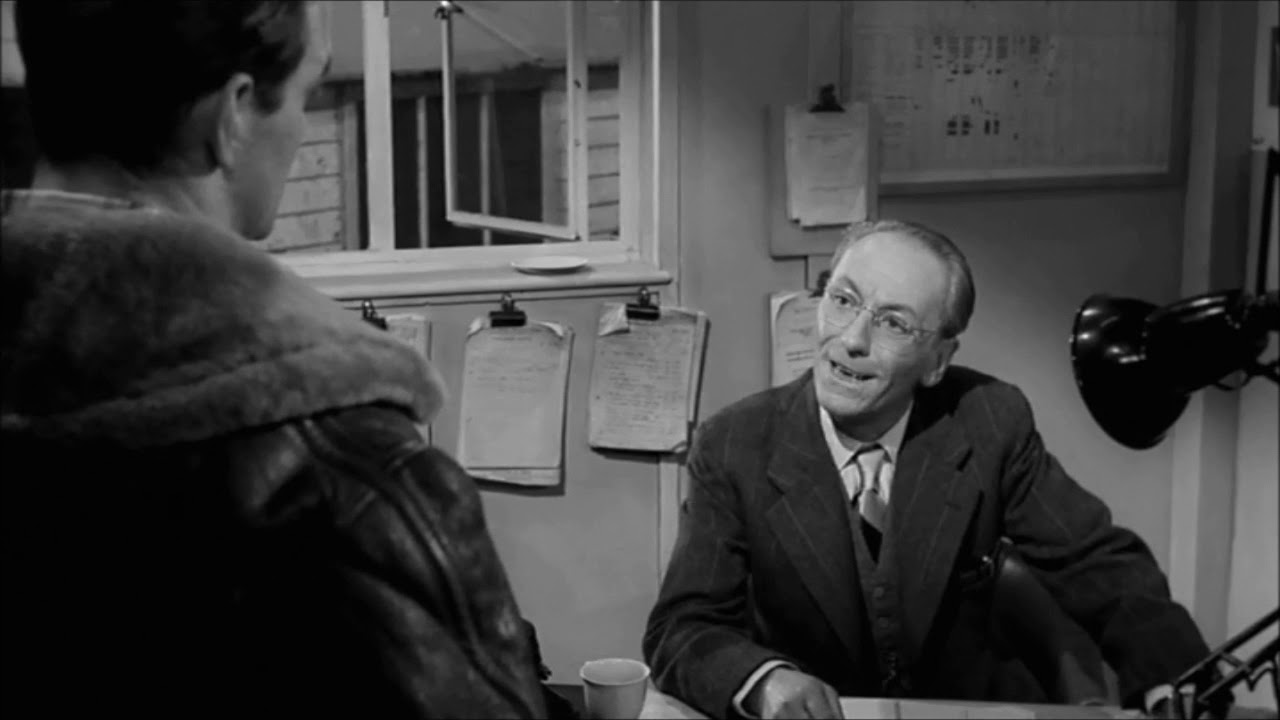 William Hartnell would go onto to play the first DR WHO in the initial series THE UNEARTHLY CHILD. 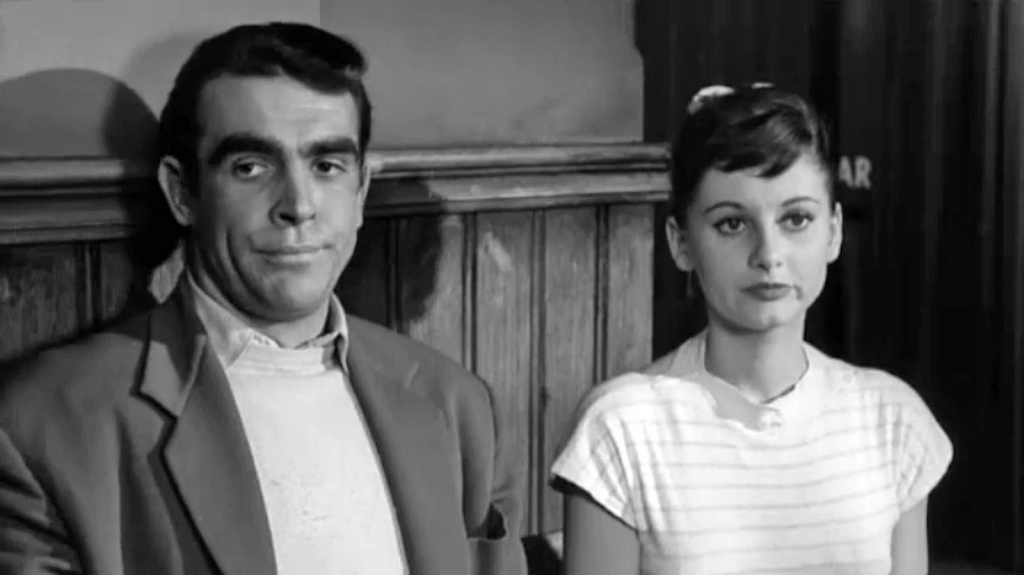 A very young Jill Ireland in a minor role as Jill,  a  waitress who tries  to woo Tom, would go on to play in the  television  series STAR TREK, marrying Charles Bronson. 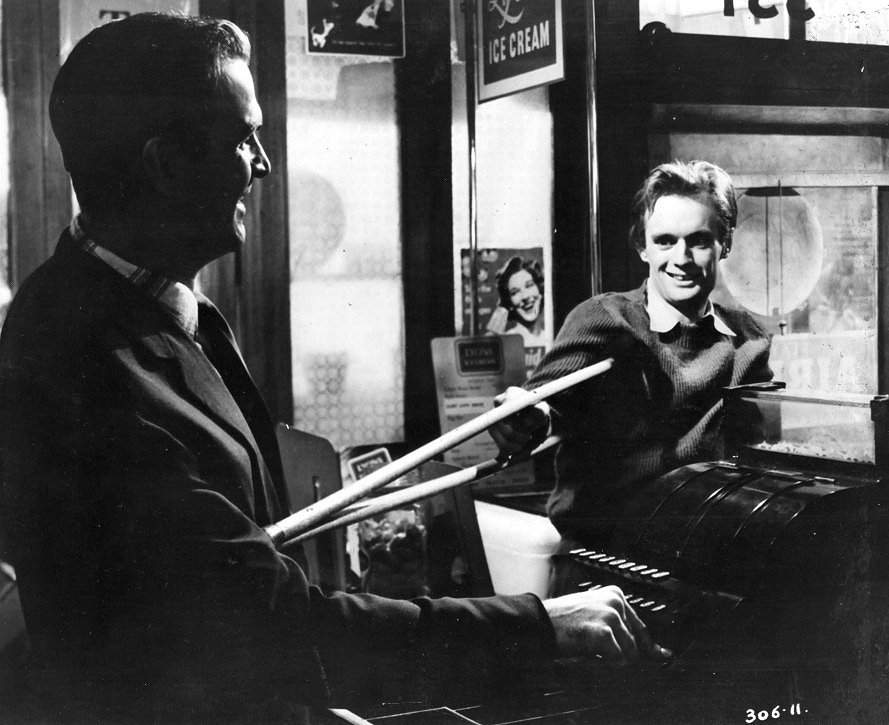 David McCallum as Tom’s brother Jimmy, whom Tom visits out of guilt for causing the critical accident.   McCallum would be Jill Ireland’s first husband as they both met on this film.  McCallum would go on to films like THE GREAT ESCAPE(1963) and television immortality as “Illya Kuryakin” in THE MAN FROM UNCLE  series and is today on NCIS. This leads me somewhat nicely to Sean Connery. 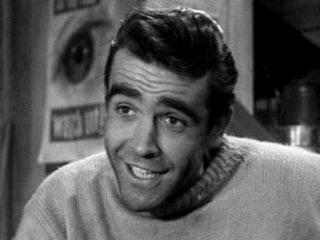 Sean Connery has the minor role of Johnny Kates, driver nineteen.  His brief screen presence in HELL DRIVERS (1957) does show his action skills. He would use these skills as James Bond beginning in nineteen sixty two. 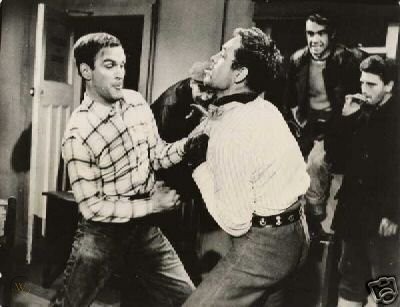 HELL DRIVERS (1957) has action and camera work that is well worth seeing. The actors blend on the screen with (sometimes) over the top passion. The picture has a gritty look to it, filled with depressing rain and the sound of scrunching rocks, greasy garages, and brawls of a postwar working class town. The black and white photography adds to the atmosphere, along with the swerving point of view and driving shots that work better than some of today’s rapidly edited, eye burning work. 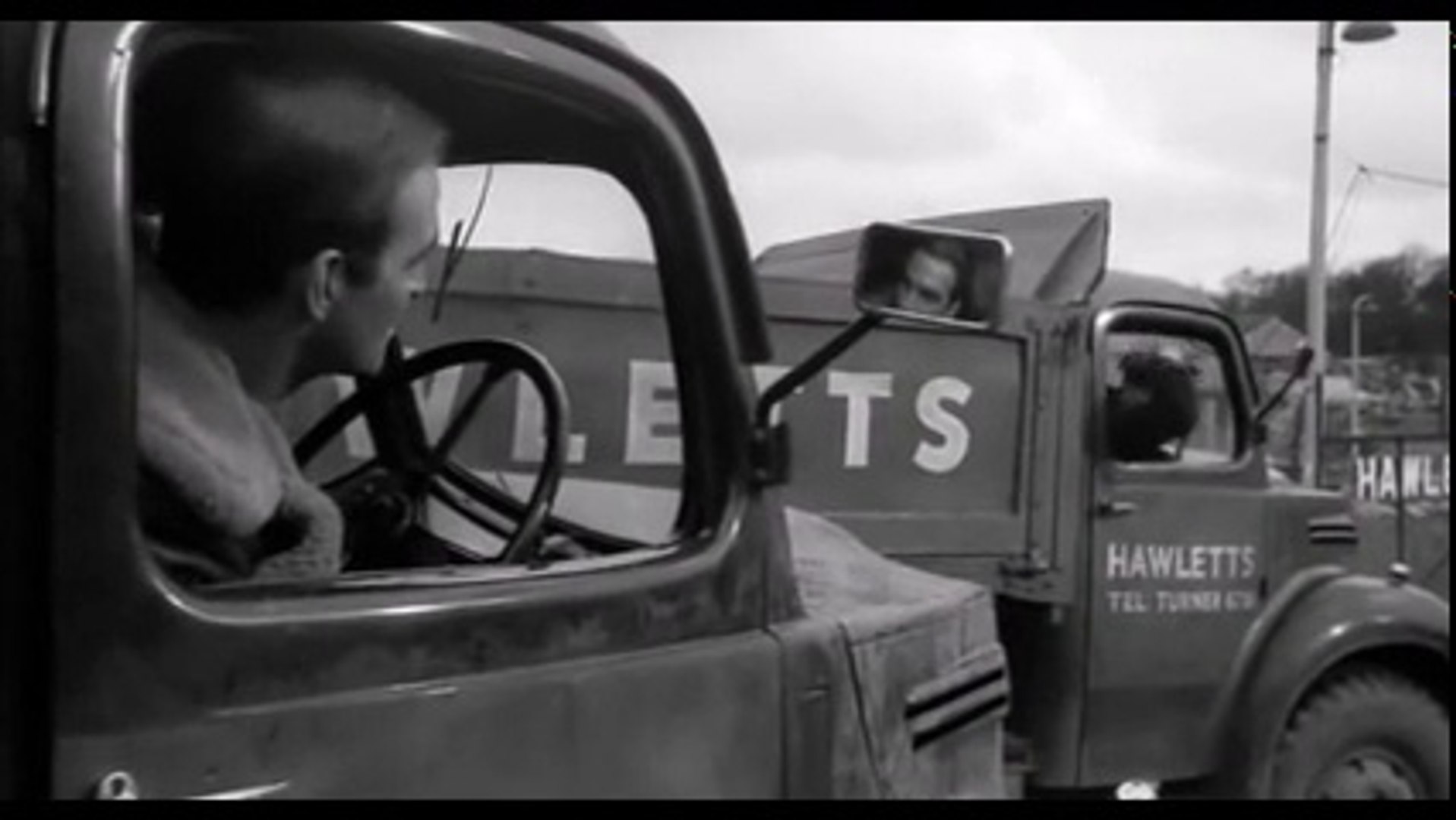 The picture has up and coming talent to see in early roles. A competent action thriller. The roads could not be clearer for HELL DRIVERS (1957).