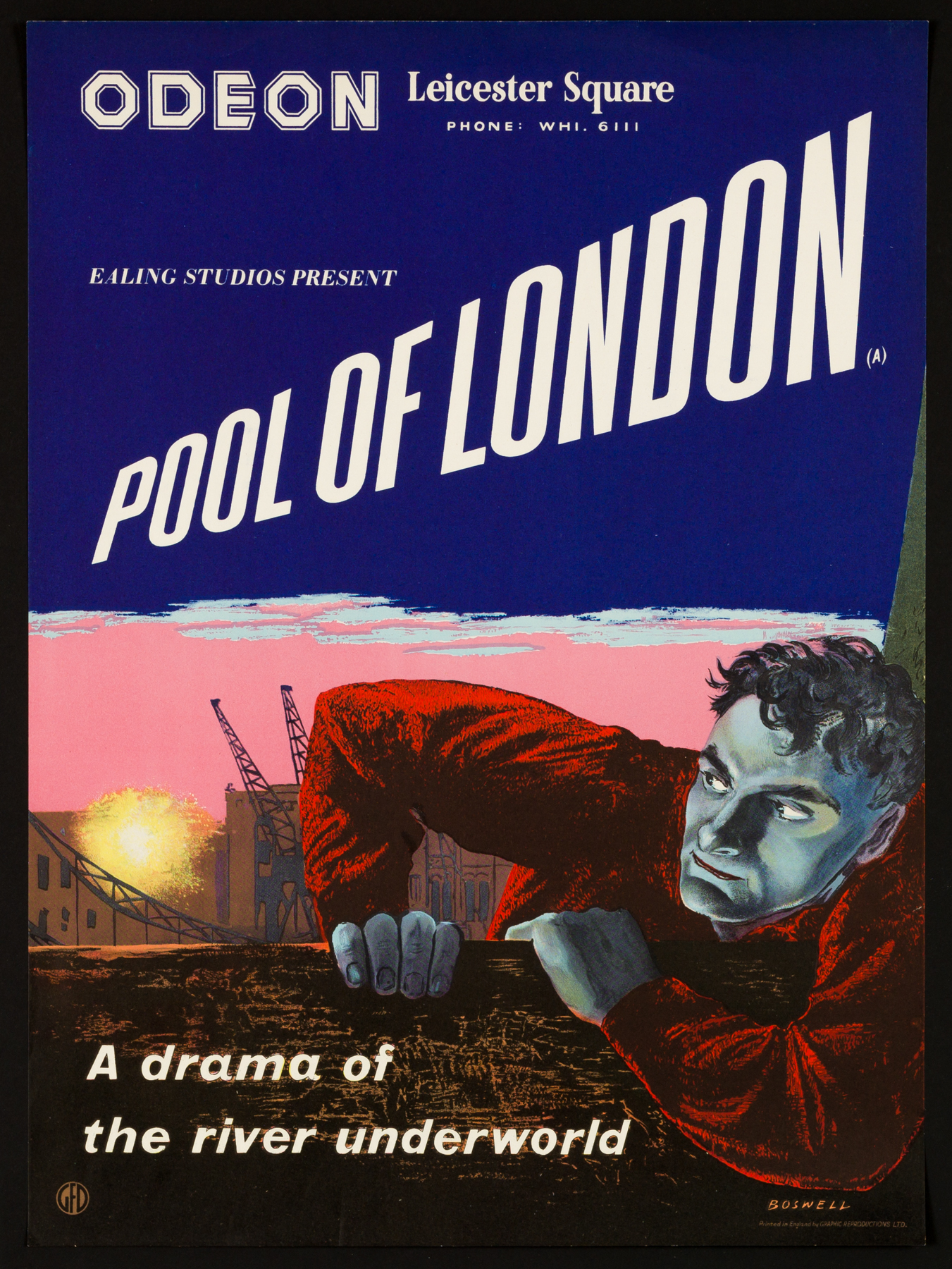 One of the fascinating aspects of film is that it is essentially an international language. Genres occur in many countries just in different forms, usually stylistic approaches. Actors are used, although you do get some cross pollination, and, of course, story.  Film Noir is easily transferable as it is common to have cities both large and small, and the same ennui that can lead to a story.  POOL OF LONDON (1951) is an example of the feeling of darkness and deeds that can come from living in a section of a city.

Director Basil Dearden’s ode to London docklands POOL OF LONDON (1951) is a well-crafted and suspenseful heist picture with a sprinkling of  (at the time) forbidden love and racial politics. 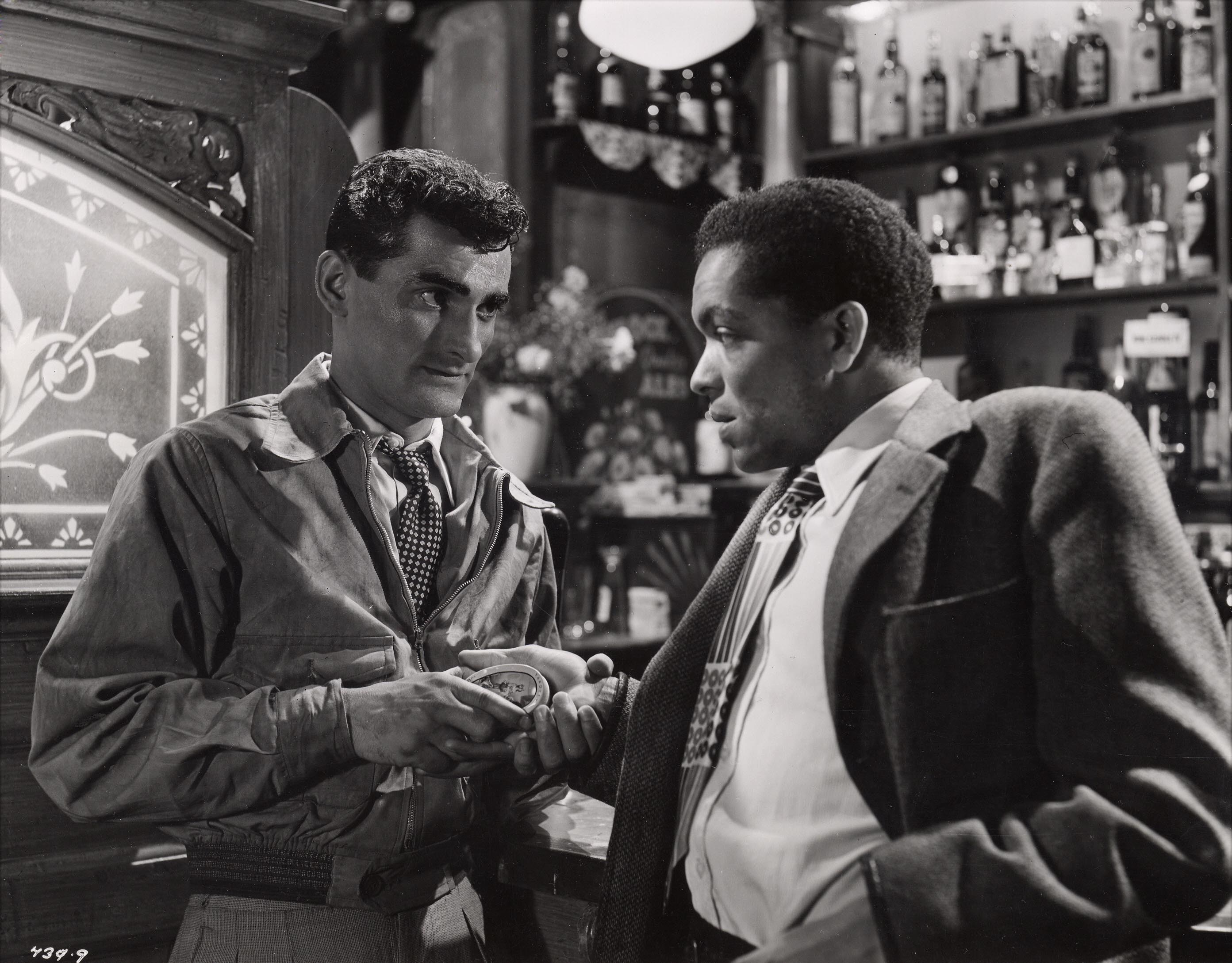 Black Merchant seaman Johnny (Earl Cameron) is waiting for his white friend Dan (Bonar Colleano) near a musical hall show ticket booth. The ticket seller, Pat (Susan Shaw) tells him he can peek at the show while waiting. He does this and gets “caught” by a doorman.  Visibly shaken, but without protest, Johnny is about to leave when the ticket seller Pat comes to help him. She offers words of comfort, but only Dan actually challenges the racist doorman. 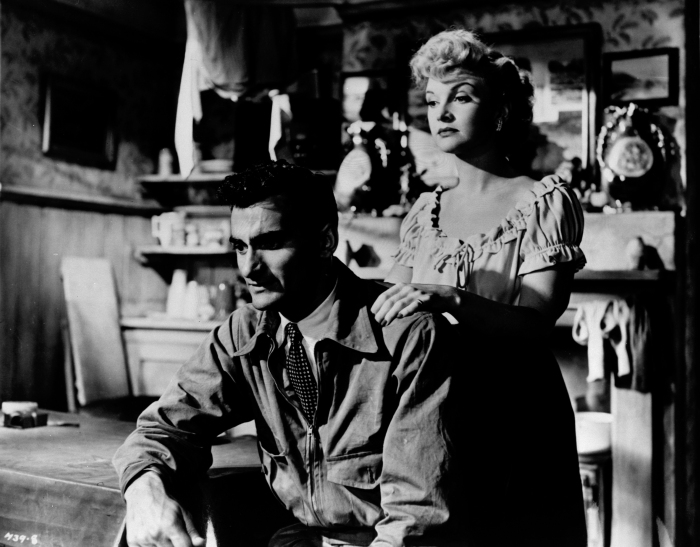 Later, Pat and Johnny go dancing after a chance meeting, where Maisie (Moira Lister), Dan’s girlfriend, refers to Johnny as ‘dirty.’ Johnny again flees the confrontation without incident and allows Dan to defend him. Johnny’s flight allows Dan to defend him again. It puts forth the concept that a black man’s justice can only be through the patronage of conscientious white men; or simply, ‘let them pass first.’  This was London in the early fifties and his reaction could very well be part of the time. You wonder whether Johnny would be able to avoid the issue forever. 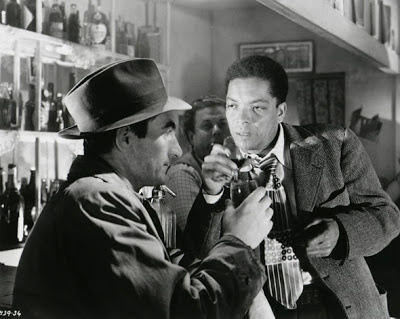 Johnny arrives at the standpoint where wholesale avoidance of confrontation when faced with racism is tenable: he adopts the refuge of the outcast and the solace of the misunderstood.  Later in the picture Johnny is swindled out of his money packet by another older white man who takes him on a binge at an after-hours club.  This leaves him drunk, lost and almost late for his ship’s departure. 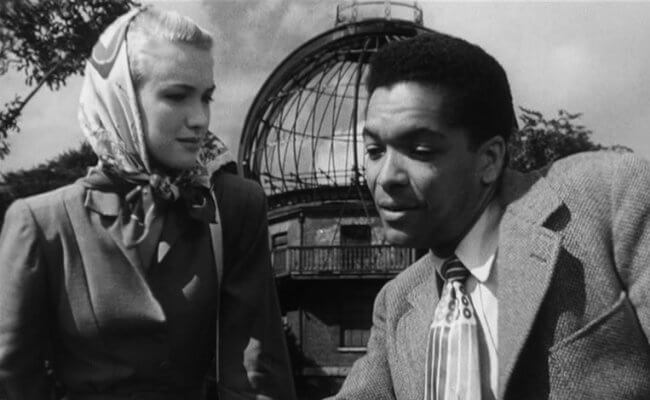 Director Basil Dearden works within the taboos as Johnny and Pat show all the signs of a couple falling in love, but physical contact is minimal and not shown, masking a strong unfulfilled passion.

Woven in are the exploits of Johnny’s friend Dan who becomes involved in a robbery and murder that causes him to flee authorities and go into hiding.   Gunfire, murky fog covered streets, and very little sunshine are part of this world.   Dan has one final opportunity to save Johnny from a different fate and bring events full circle.

This is a heist film close in the tradition of ODDS AGAINST TOMORROW (1959) without the magnetic hate of Robert Ryan. Basil Dearden uses real locations at the time, such as the Thames. It was at one time a place for ocean going ships carrying freight and the dock life of hotels and bars frequented by characters both good and not so good. 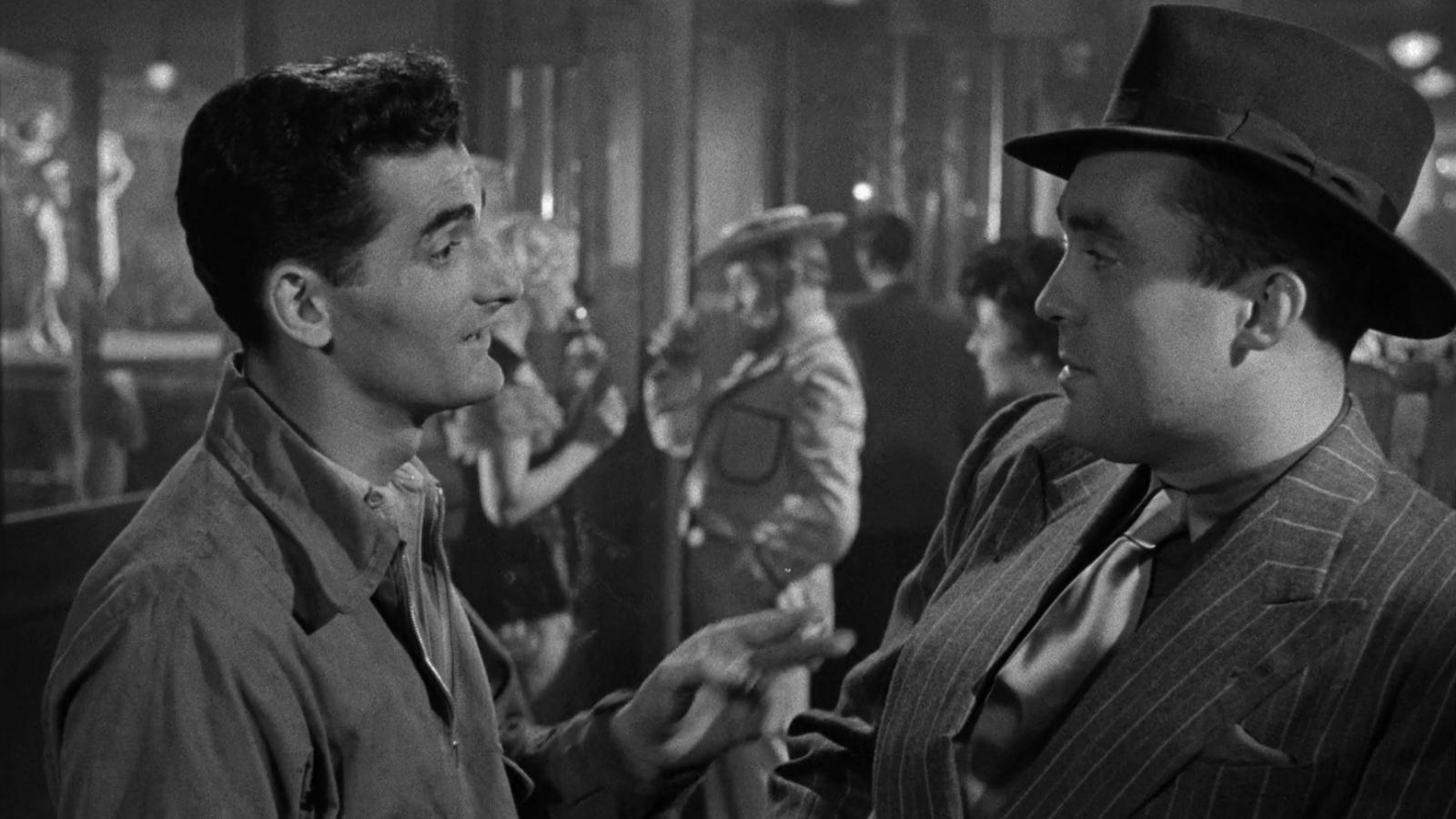 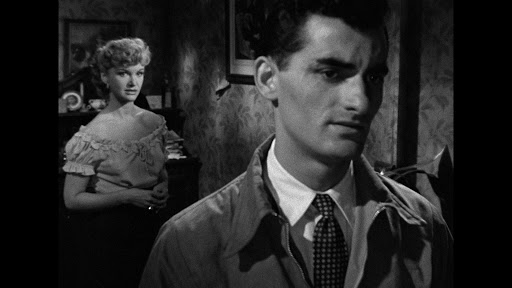 Bonar Colleano as Dan is almost on equal footing with Johnny (Earl Cameron) as the two play some good buddy moments aboard ship. Dan is suitably a wise tough guy making his way around the streets. An opportunist in love and money. Colleano gives Dan a wiry, hyper quality, fast moves and quick speech in contrast to Johnny. Dan is still the action oriented white man of cinema, and Johnny requires his aid in life to get by.   Dan associates with many low lives because it suits his purpose. One can always make money, given nylon stockings, watches and chocolate bars.  There is a good streak in Dan and it shows. The good side is a part of the collective character of all the merchant seamen. 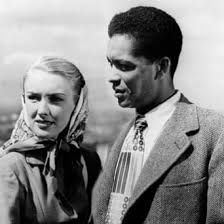 Susan Shaw as Pat the ticket seller is effective as the rather bright happy yet seemingly nice girl that meets Johnny. They smile, laugh, talk together of life and loves, go places together.   Pat makes a date with Johnny that he cannot make as his ship is leaving. This changes and Johnny runs to the theatre where the two were to attend a show only to see Pat with another fellow and group of friends. Johnny knows once again that he doesn’t fit in and puts his head down, vanishing into the streets.

Johnny is always the nice fellow who is acted upon. He even brings in Dan’s undershirt from the line without being asked.   There are two contrasting stories of love and acquisition at play in the picture. 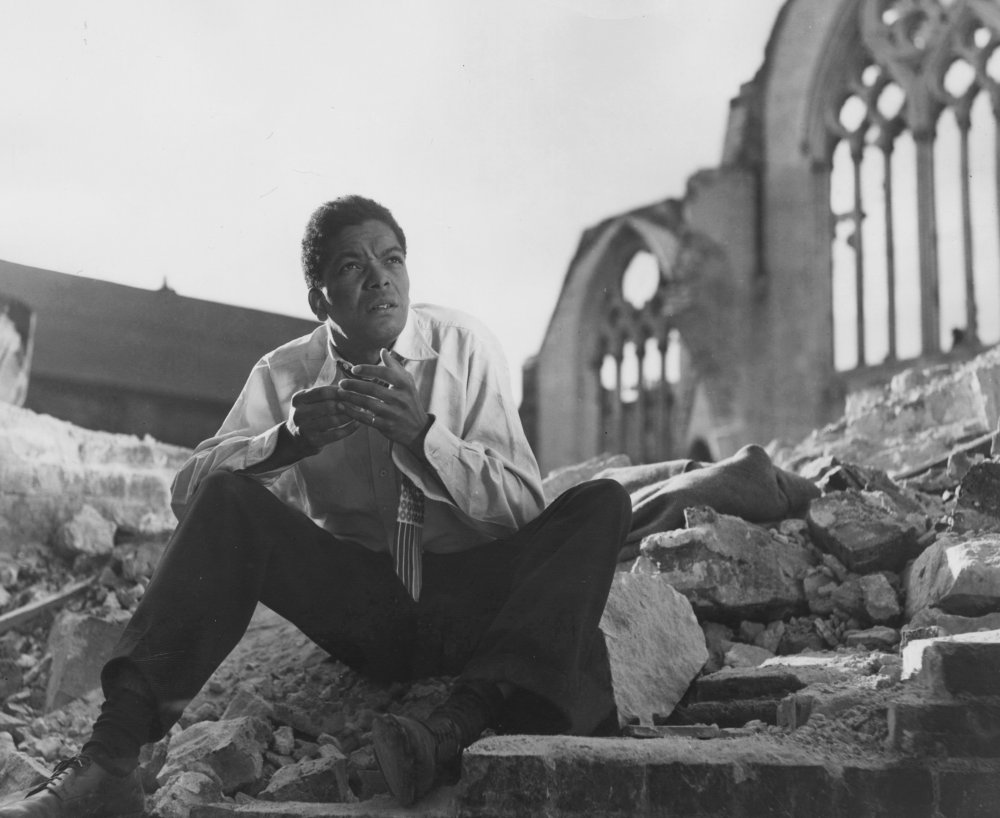 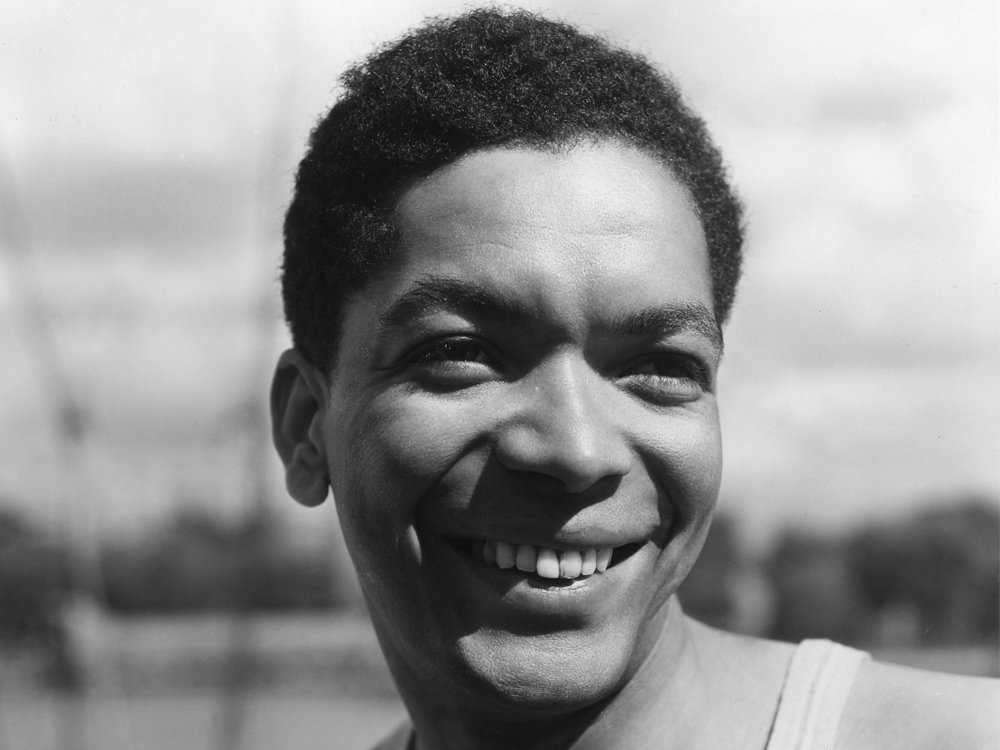 Earl Cameron in his first film role is subtly brilliant. He moves form misunderstood outsider, to would be lover, drunk, to a simple fellow that wants to ‘go back home’ to his country. Why he wants to go is not revealed; however, one can see in his eye because he simply feels he does not belong where he finds himself.

This was years before the work of  Sidney Portier, Morgan Freeman and others playing on even terms with white characters.   First they had to go through the angry black man and woman personified by Blaxsplotaion films which did little to advance their racial part in film. In fact, it perpetuated some of the worst. 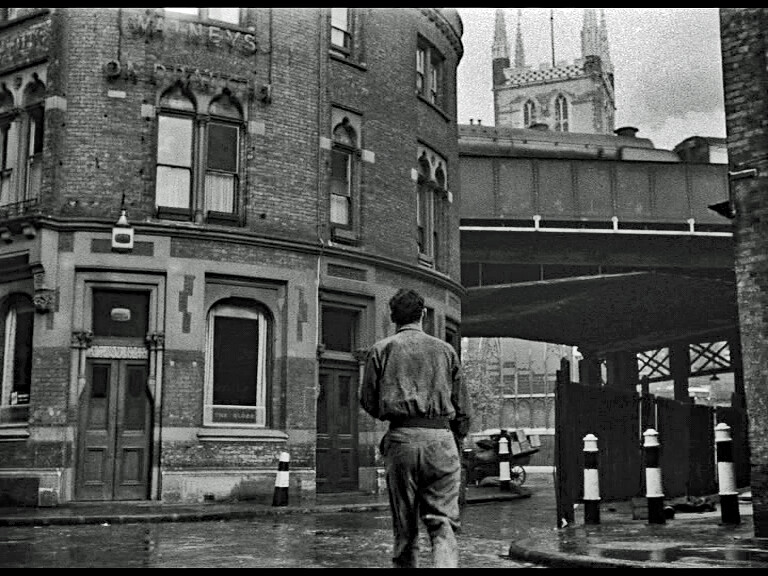 POOL OF LONDON (1951) is well directed with plenty of mood and effecting performances by all.  There is action, danger, atmosphere and a lurking fear that something isn’t right as it is literally ‘every man and woman for themselves.’ The racial undertones of romance between a black man and a white woman hinted at were a first for British film. Dan and Johnny both achieve a getting what they want of sorts, just not the way they planned.

Baseball player Jackie Robinson wrote in his autobiography that in spite of all he accomplished he never had it made. Perhaps what Johnny felt as his ship sailed out of London and to his home.