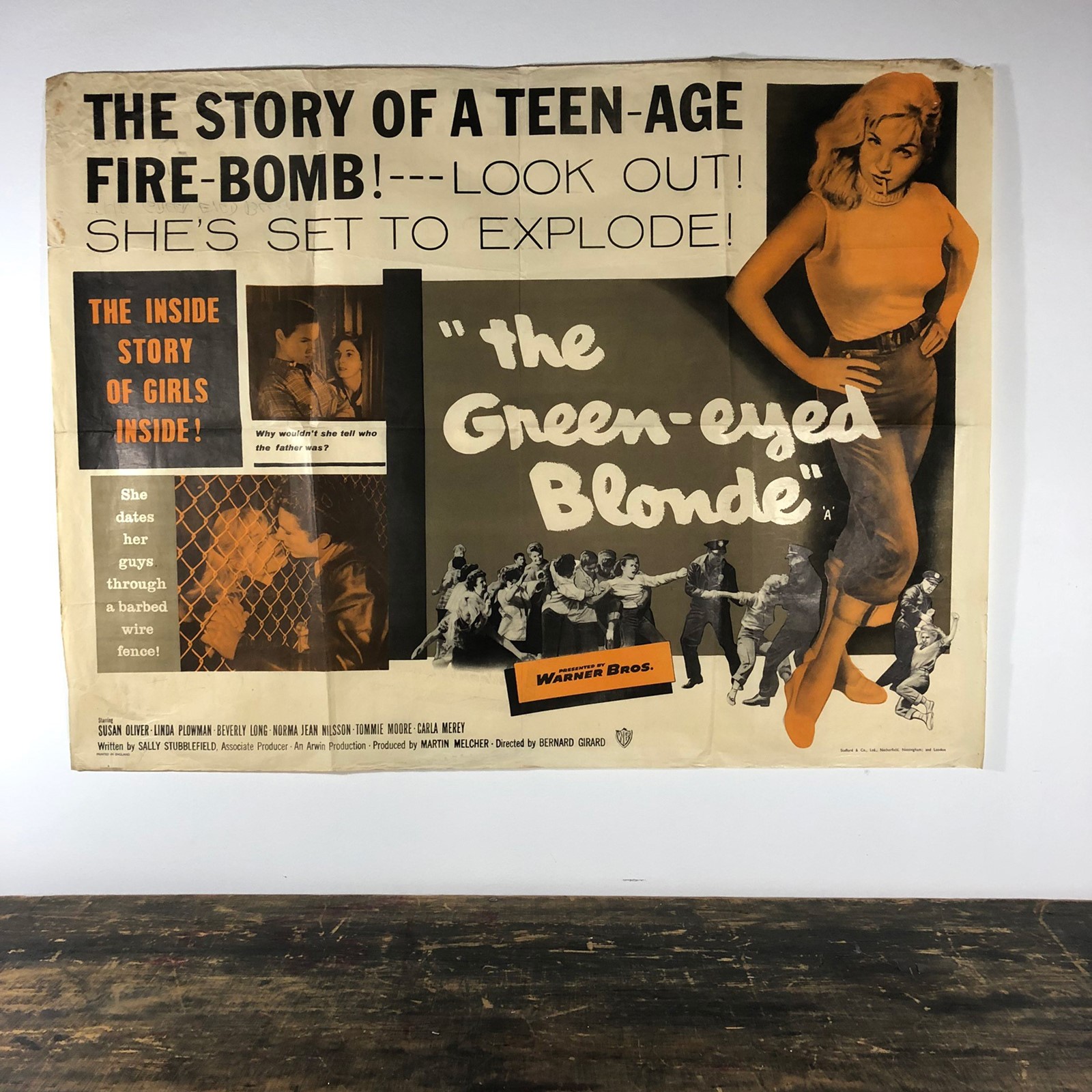 The grind house / exploitation film sub genre known as  the biker film or teenage juvenile delinquent picture are fondly looked at today through a different lens.   What seems to be cheap, simple and  visceral entertainment capitalizing  on trends or headlines has become a retro art form; often vaulting these films to cult status today.  The function was to launch  directors, actors , writers and crew to make  quick money.  The delinquent was often a male with great hair, leading man looks and clothes who rebelled against his school, family,  friends and  authority figures. There was a trial by vehicle to gain  the love of a local girl.  The other side of this was the female prison pictures.  THE GREEN EYED BLONDE  (1957)is one such example. 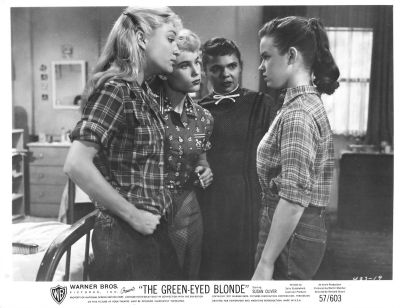 Warner Brothers produced this picture in its customary gritty house style .   The  film was directed by Bernard Girard, who went on to a massive career as a  writer and  director of segments of Playhouse 90,  Alfred Hitchcock television series  and many  others.  The  writing was credited to Sally Stubblefield –  blacklisted writer Dalton Trumbo.  This picture marks the on camera debut of Susan Oliver: the green eyed blonde.

The story is set in a women’s reform school  for wayward girls and unwed mothers  near Los Angeles.  Betsy Abel (Linda Plowman) has had a two month  old baby and refuses to reveal the father and is  being admitted to the school.   Betsy hates her mother and has no problem expressing it openly much, to the shock of all concerned. The strict Mrs. Nichols (Jean Inness) tries to reason with everyone, without success.   Betsy is taken into the school for an undetermined length of time to be befriended eventually  by her roommates Trixie  Budlong (Tommie Moore), Joyce  (Carla Merey), Ousie (Beverly Long), and of course Phyllis ‘Greeneyes’ (Susan Oliver).  Phyllis is about to be released in two months but cannot wait as  she arranges a meeting down by the fence with her recovering addict boyfriend . The two meet away from prying eyes to smooch though the  wire fence, and profess their love for each other. 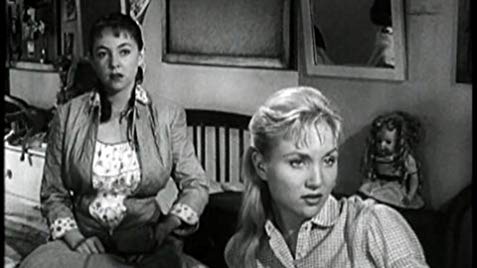 Betsy’s mother and her boyfriend come to the school and threaten to  put the baby up for adoption unless Betsy reveals who the father is.   One of the  girls in the reform school, Cuckoo (Norma Jean Neilson) steals the baby from the back seat of their car and hides it in the dormitory. 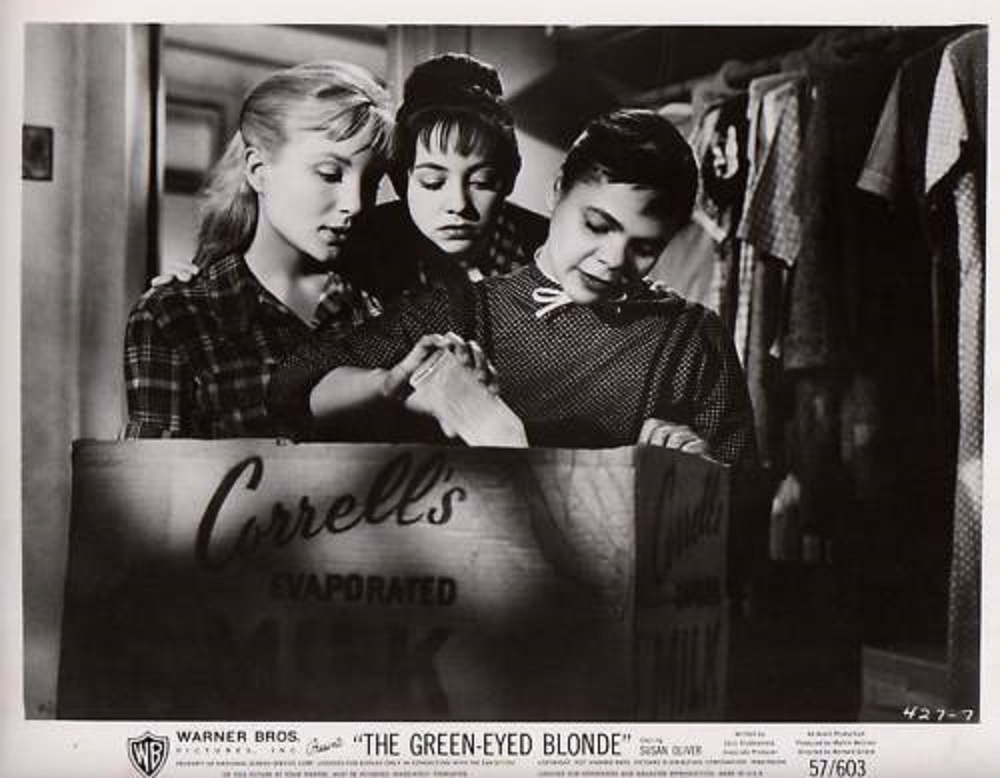 The girls work together to take care of the child by stealing milk, making diapers, and playing with the child while it sleeps in a box in the side room. Things are going well till the baby is discovered when  a new worker at the school, Margaret Wilson (Sally Brophy),  hears crying. The  film  becomes a race against discovery of the child by others and a surprise resolution to the identity of the father. 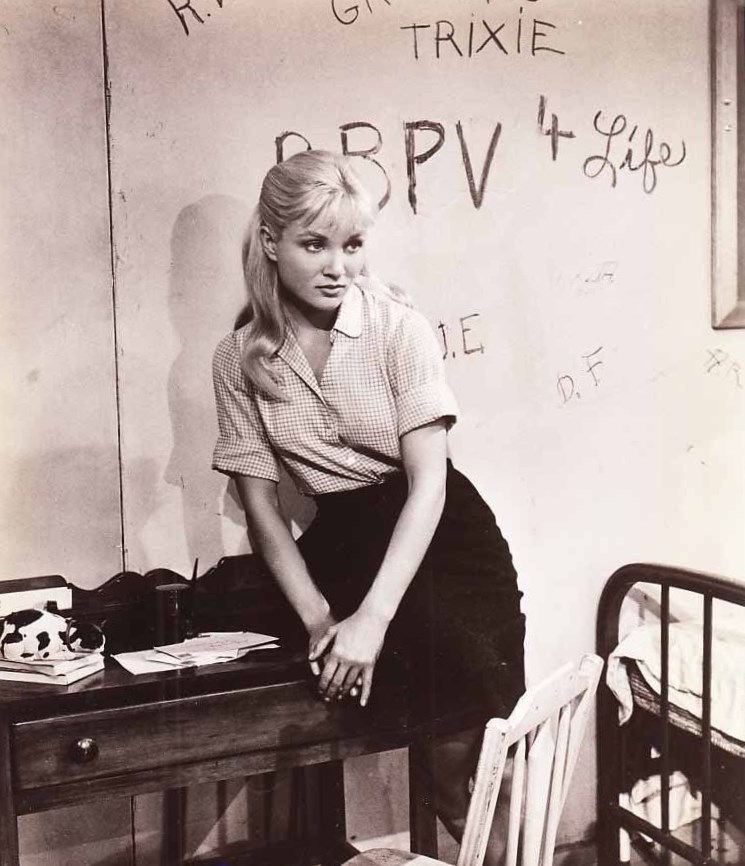 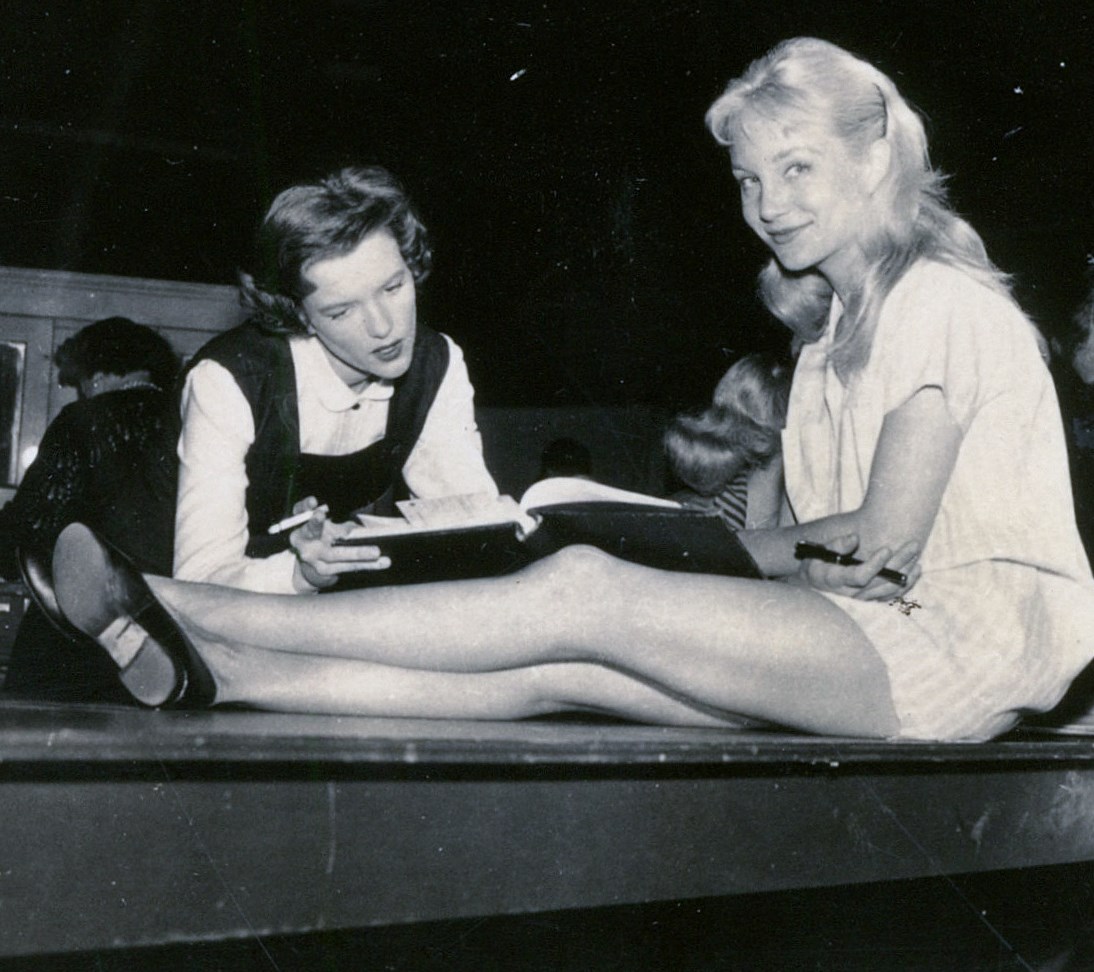 Susan Oliver does well in the role of Phyllis, even if she is not onscreen as much as  others.  Oliver slinks about, being sensual, yet at the same time being a little  girl who packs away her favorite stuffed animal when leaving.   The  sensuality of  Oliver is shown best in her moments with her boy friend at the fence.

The two literally make love to the wire fence in their desperation to be together.   Oliver is  blessed with  “hooded bedroom eyes” that show  quite  well in black and white and later  when their blueness is  revealed  in color  productions.   This picture  was  clearly meant to be her launch as she is featured on the poster and the  title.

Susan Oliver had a varied career. She is mostly known today for being Vina,  the Earth girl enslaved by the Talosian people of Talos IV, who crash lands and was not “put together right after the crash as they had no guide” in Star Trek’s  original pilot film  THE  CAGE. The pilot film was later re edited into the two part episode THE MENAGERIE.  Oliver also  turned to directing and was  an accomplished aircraft pilot. She was the fourth female pilot to cross the Atlantic solo in a  single engine plane.  She also had a commercial pilot’s license, and was contracted by Lear Jets to see if she would  be interested in setting record times  for them.    Oliver  raced  aircraft, and was co pilot in  a Piper Commanche in the 2760-mile transcontinental race known as  the ‘Powder Puff Derby. ” It resulted in her being named  ‘Pilot of the Year’ in 1970. 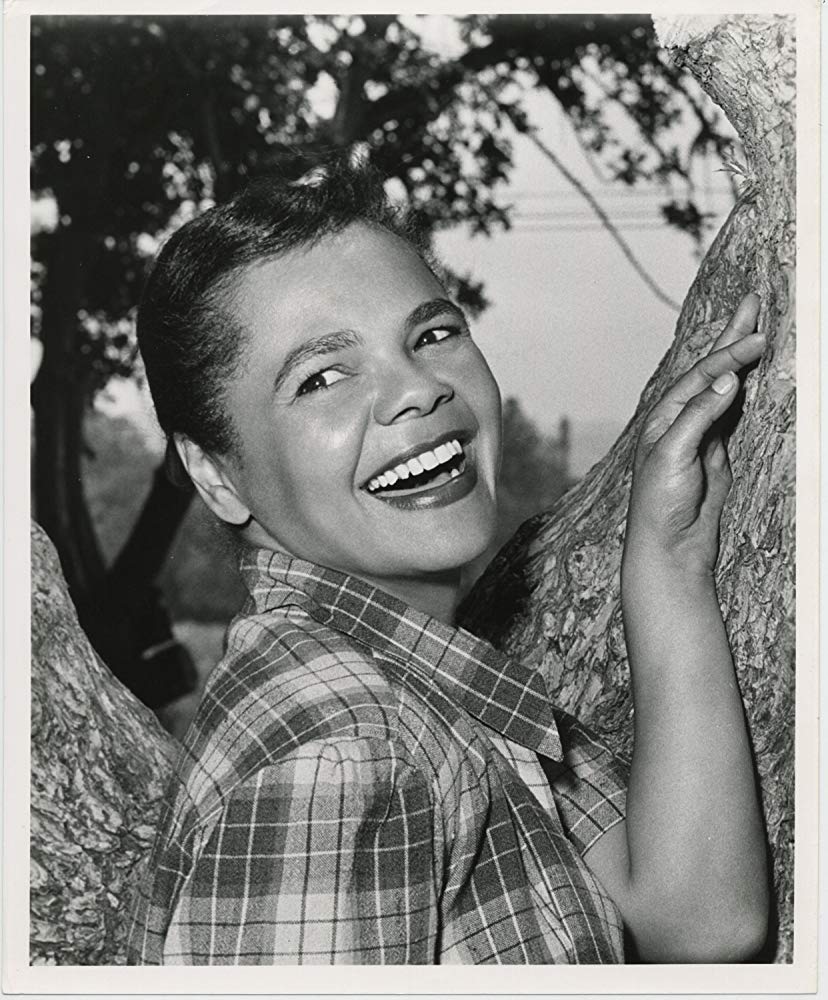 THE GREEN EYED BLONDE (1957) has strong performances by black male and female actors.  Tommie  Moore, as Trixie Budlong, lights up the screen with her smile and energy.  Moore gives a heartfelt performance as she is reunited with her Father, played by Roy Glenn.  Glen would go on to play (among  other roles) Sidney Poitier’s  father in GUESS WHO’S COMING TO DINNER (1967) . 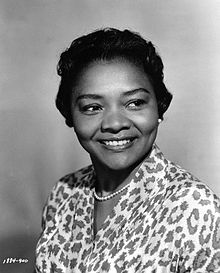 Juanita Moore takes a bow in an uncredited role as Miss Randall.  Moore later plays Anne Johnson opposite Lana Turner in the  1959 version of IMITATION OF LIFE. 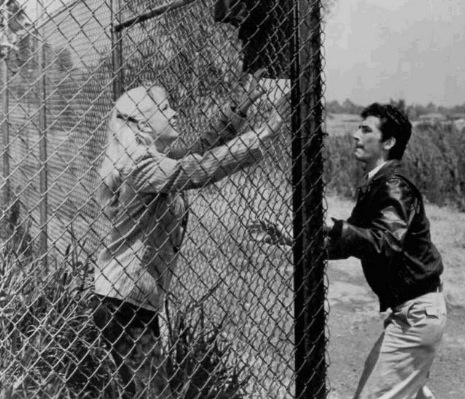 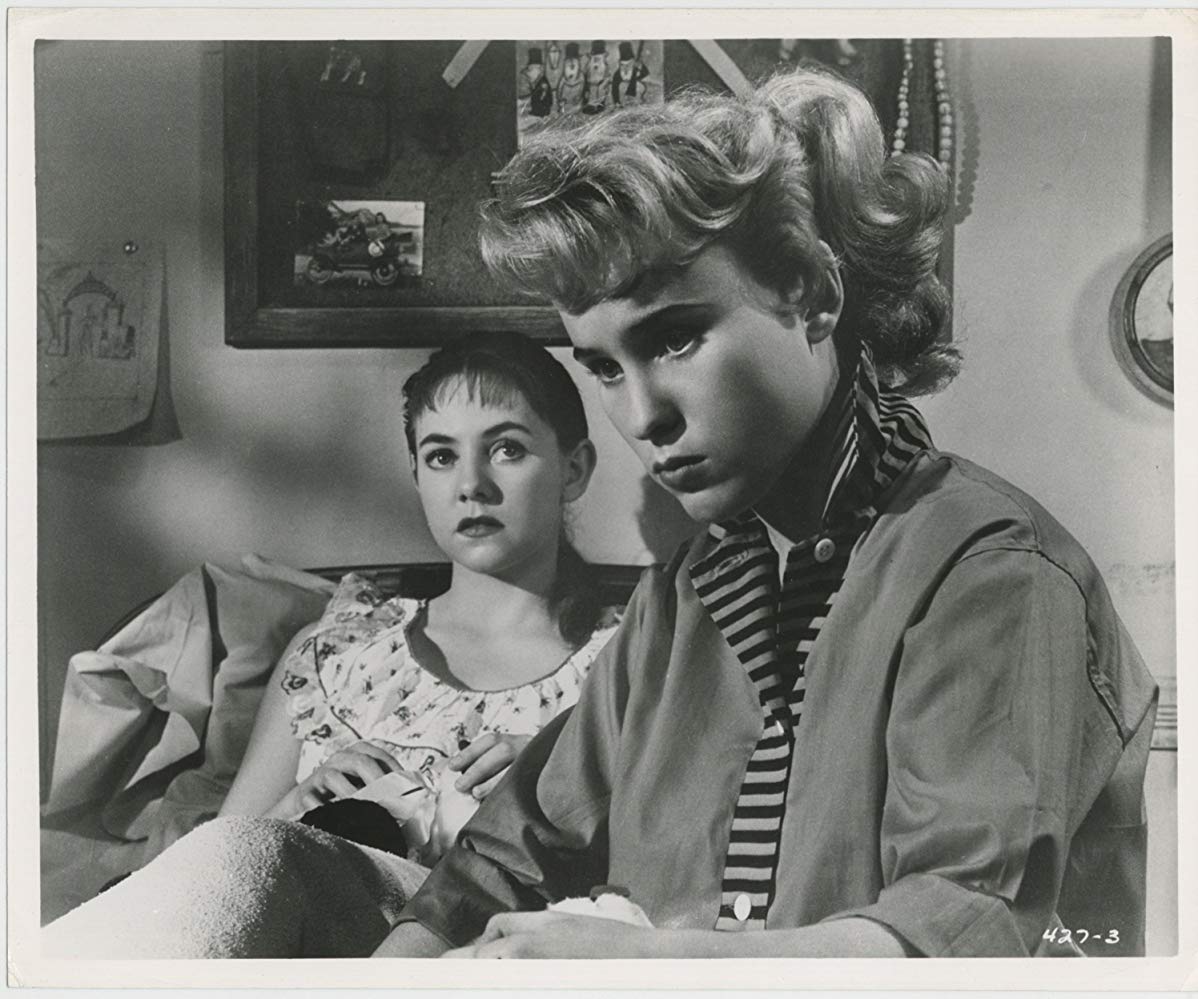 THE GREEN EYED BLONDE (1957) moves well, considering it uses a  small amount of  sets and exteriors.  The story is a Dalton Trumbo one with hard hitting dialogue, risky for the time moments, such as same sex implications in scenes with the girls.   It has a double edged ending with moments of strong emotions for all the actors.