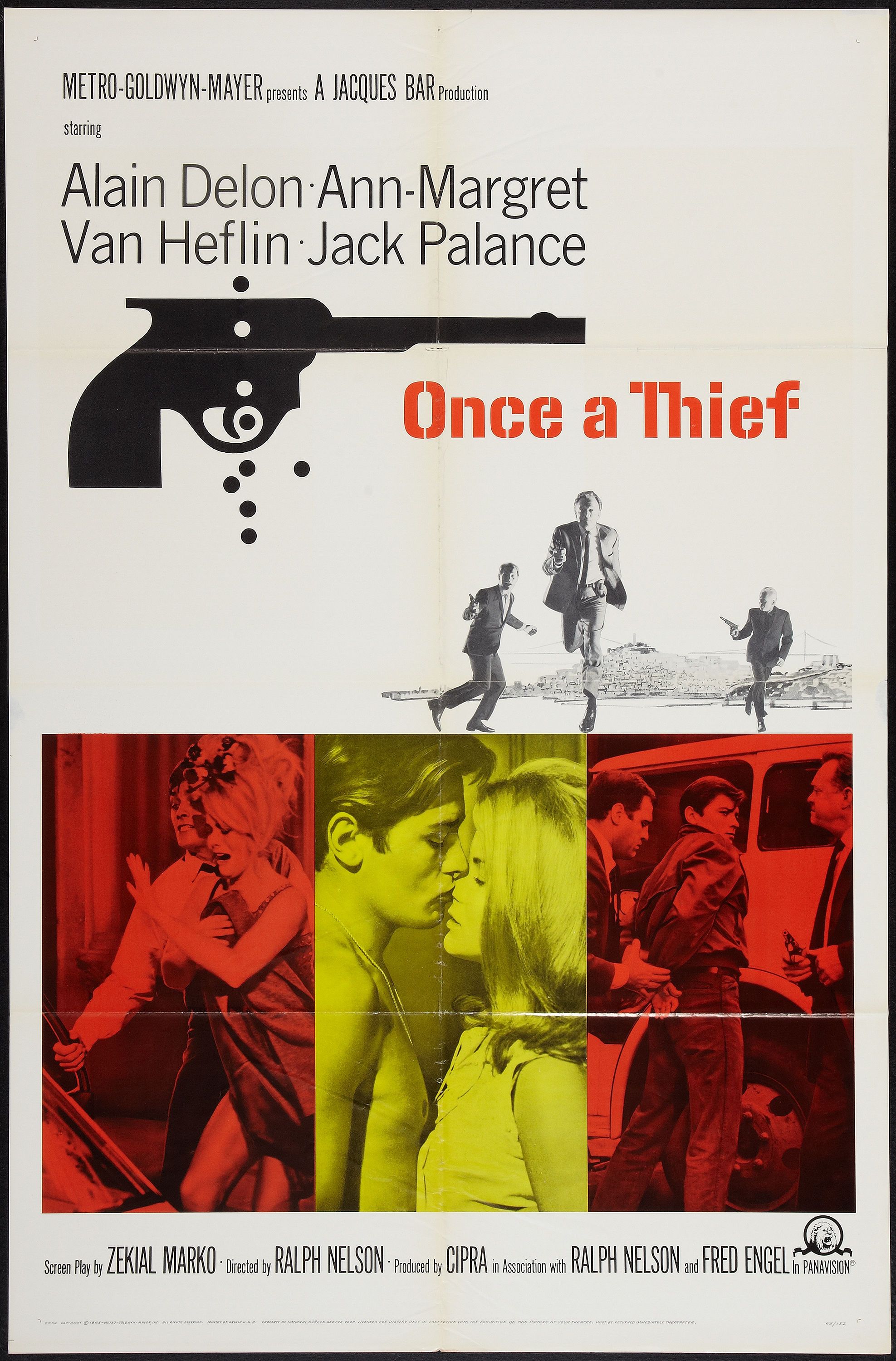 The little things you find when you walk into a shop – like Alain Delon’s character did  in ONCE A THIEF (1965). This Ralph Nelson directed picture is a stylish thriller from the opening frame to the end titles.   The  opening sequence, shot  in a  San Francisco jazz club, features a drum solo inter-cut with audience members  that toss in comments. These people have  stories themselves; either in the their tone,  their look,  or their interaction with those around.  The titles move in and out of the frame, blending and creating jarring effects similar to those of PSYCHO (1960).  The  city’s mood is a period of style and grace following a brutal crime committed by a man driving an antique car.

The story is a mixture of Film Noir themes:  mistaken identity, murder and trying to beat the past, all shot in glorious black and white in San Francisco. The city  itself never looked so desolate with concrete, neon, hills, dark shadows, and  sleazy clubs. 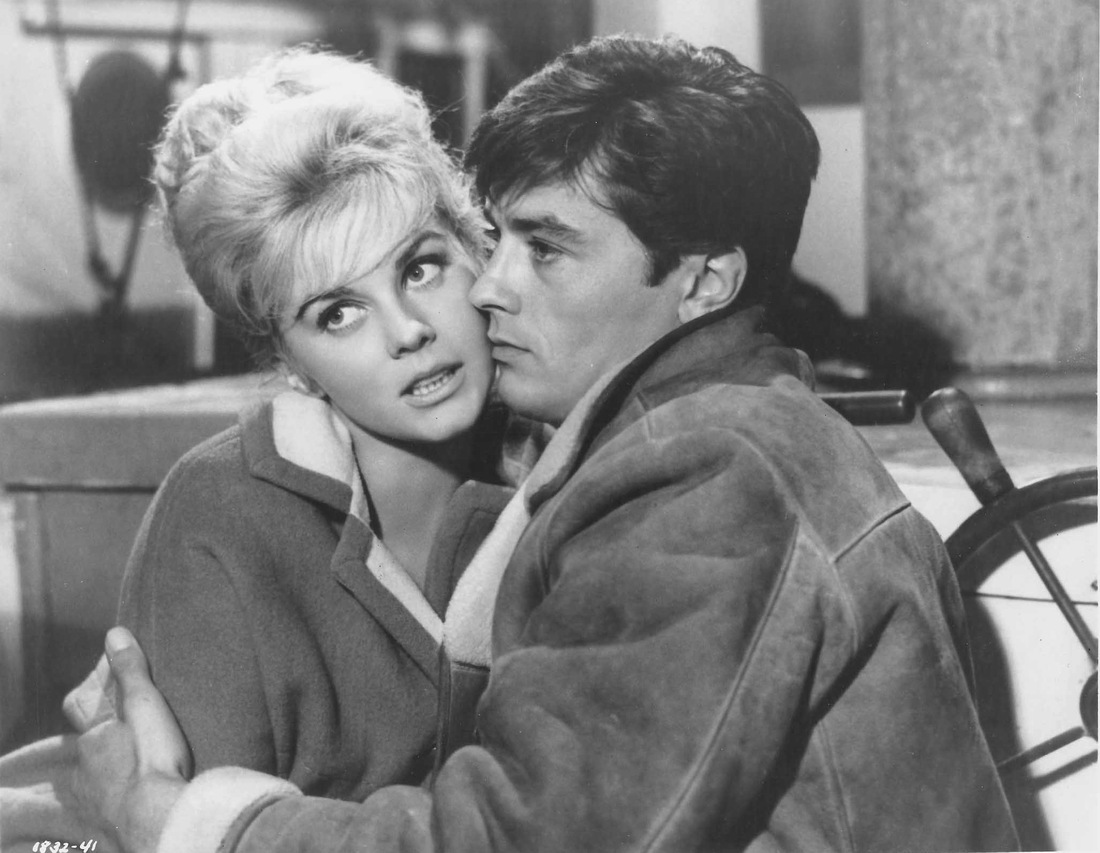 Ex-convict Ed Pedak (Alain Delon)  tries to lead a normal family life with his loyal wife Kristine (Ann Margret) and their daughter, as well as a regular  job as a truck driver.   Detective Mike Vido (Van Heflin) enters Ed Pedak’s life  as a robbery takes place in a Chinatown store that bears the same trappings of one perpetrated by Pedak that sent him to jail for two years.   Vido is tormented by Pedak going free as it was Pedak that shot him in the stomach during the past robbery attempt.  Vido carries the bullet casing as a reminder.   Vido is determined  to get Pedak, no matter the cost. He begins to follow him.   Money grows short for Ed and his wife  Kristine as his ambition is to buy a fishing boat and have his own business. He puts a down payment on the same night as the Chinatown robbery.  Ed’s prosperous  brother Walter (Jack Palance), comes to visit with the opportunity of  one night’s work and a big payoff.  Ed refuses to do the job, but then   events  change as he loses his job driving as he is arrested by Vido for the Chinatown caper.  Ed passes a  lineup without being identified and is freed but still has no job.    Kristina takes a job as a hostess in bar which means skimpy costume, late hours, no wedding band worn and lots of tip money.  The way is clear as signs point  to Ed helping his brother. 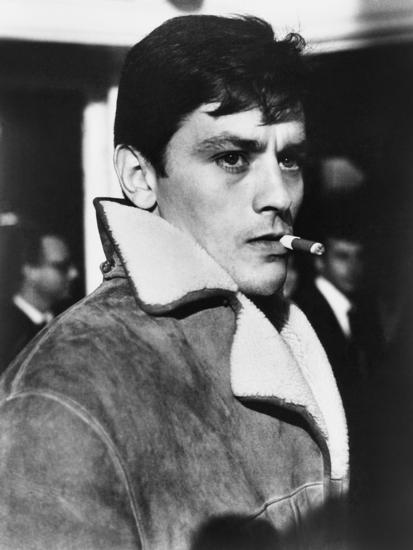 Alain Delon is brilliant in the role of Ed Pedak with just the right amount of  new comer charm of a person trying to make good.  He is cynical and icy at various junctures of the story. Tender with his family and at the same time capable of explosive physical violence as shown in a tense moment with Ann Margret in the club she is forced to work at. 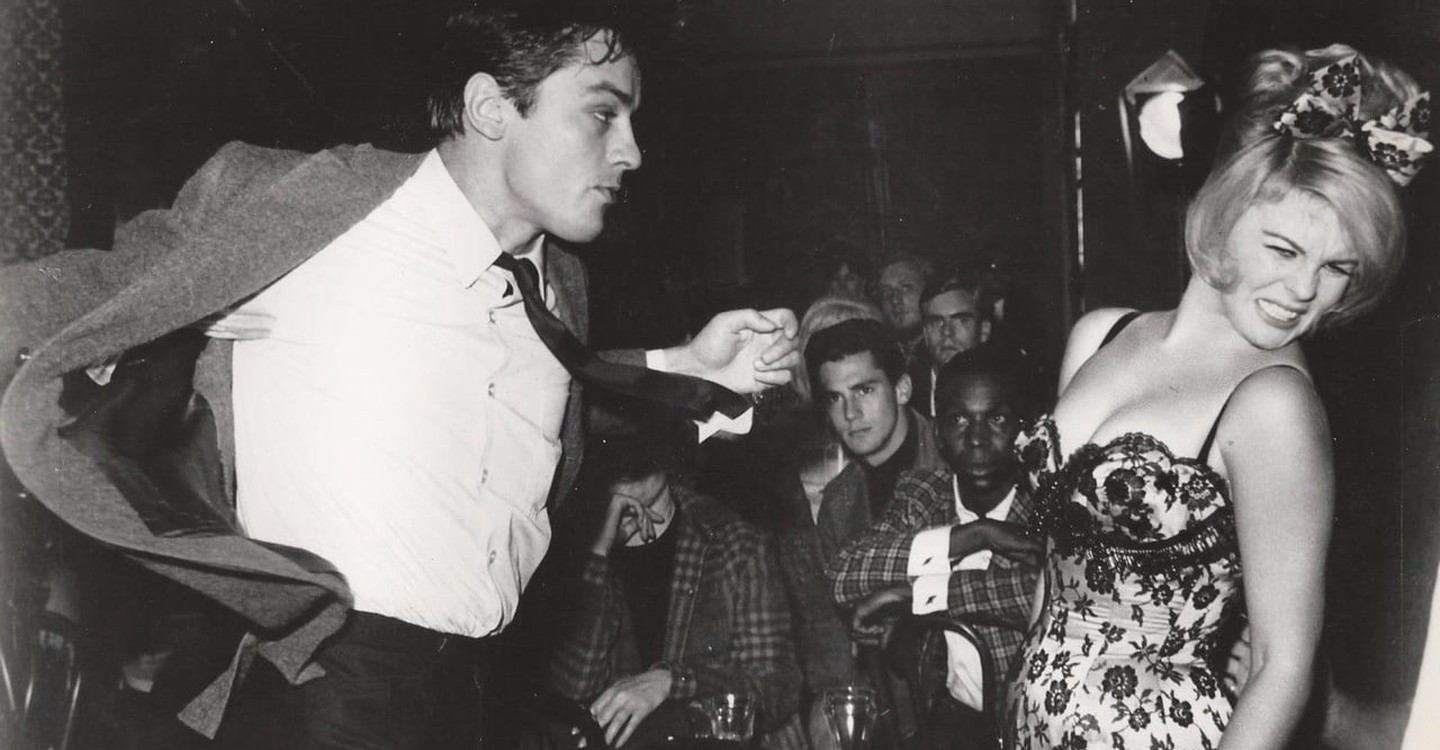 Delon has the icy eyes that all film Noir folk have in some shape or form which change with each emotive moment.  He moves with the grace and style of a dancer  and this gives good flow to the scenes while also accenting the other characters. 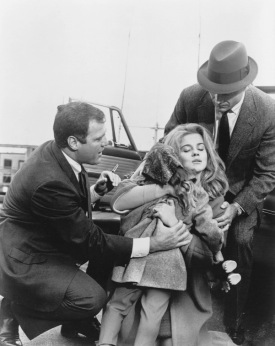 Ann Margret  was 24 years old when she appeared in ONCE A THIEF. She was a rising star at the time, and romantically linked  with Elvis Presley during the making of VIVA LAS VEGAS (1964).  Margret gives Kristina the depth of loyalty and shows love both for her family and and daughter. She does face physical abuse in this picture  that is strong even for today.  The abuse sets up the  screams,  and her missing child is kidnapped by one of the greedy henchman,  a blonde albino in sun glasses, who has a voice like sandpaper, called Sargatanas (John David Chandler). 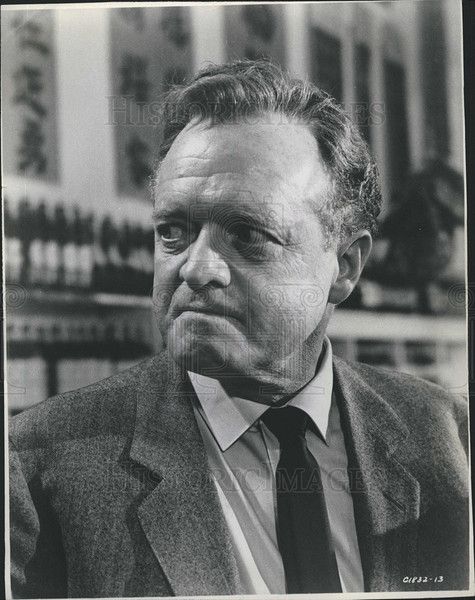 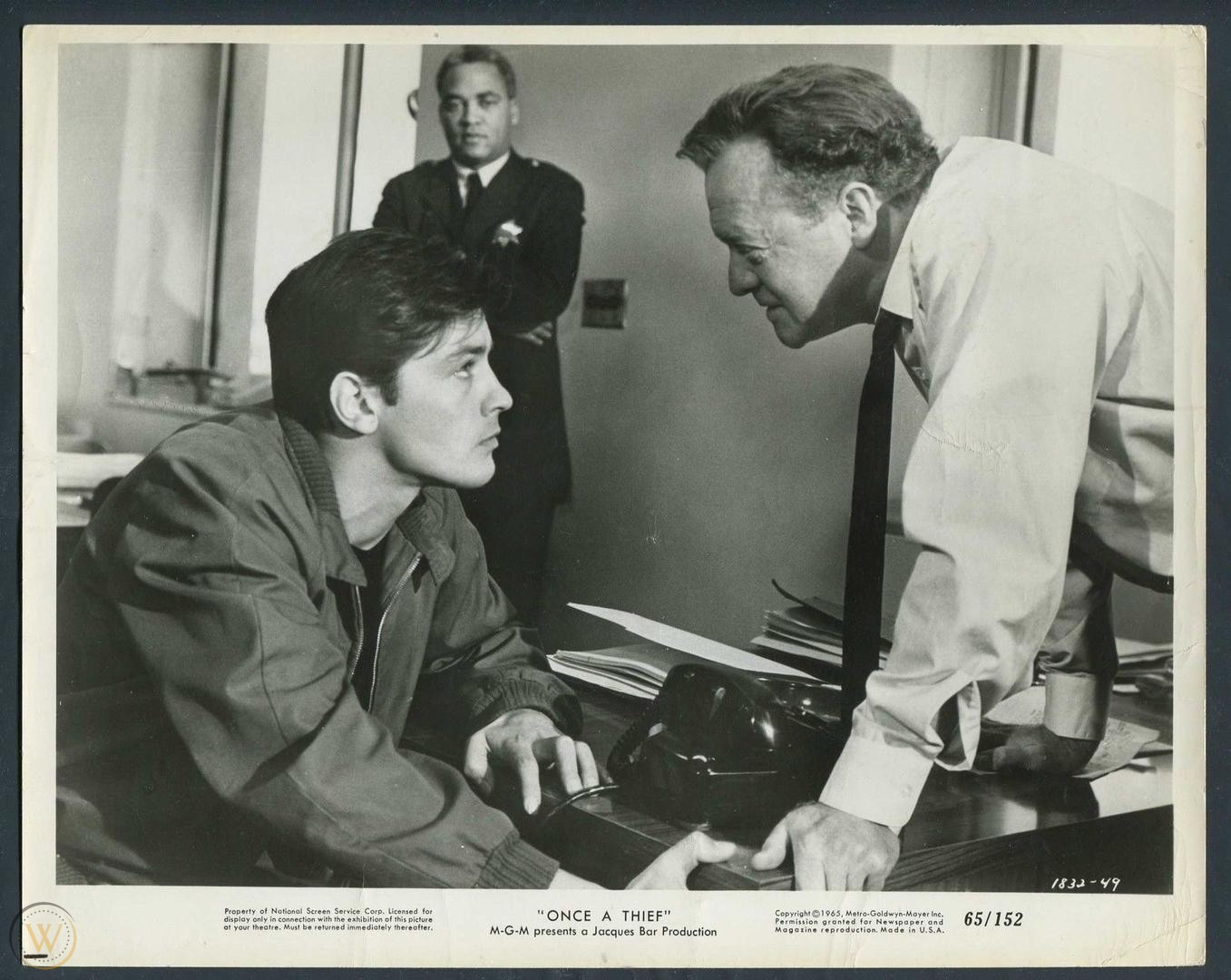 The actor who steals the show by just walking on is  Van Heflin as the tormented Mike Vido.  Helflin is no stranger to Film Noir nor playing policeman of a different stripe.  He gives Mike Vido enough surface pain in his walk and mannerisms to show he remains in physical pain  from his healed stomach wound.  Helfin’s voice is similar to  actor Charles McGraw whose gravelly tones and  granite jaw looks added to any film he was in.

Jack Palance as Ed’s  brother Walter sleazes in and out of scenes with those tones in  his voice promising all will be well for one night’s work. Palance  fits in the cesspool of characters, along with the homicidal albino Sargatanas and Shoestein (Tony Musante). Shoestein is a particular piece of work as his broken front teeth (that he never fixes) are knocked out in a graphic fight sequence. Shoestein laughs, smiles, and provides muscle  to match his blind obedience. 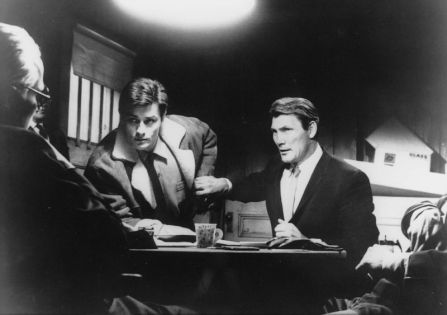 The picture was  written by Zekial Marko, who is no less colorful than the people in the film. Marko was cast as a pot smoker  who shares a cell with Alain Delon.  Trouble was,  Marko was a real life pot user at the time when it was not good to be and was arrested during the making of the film.  He was  jailed the night before  an early call to shoot  his  scene.

ONCE  A THIEF (1965) is well made with a  European style and flavor close in impact to the classic RIFIFI (1965). Special mention goes to Lalo Schifrin for the music throughout the film, particularly the opening credits.  The picture  has  grace,  characters,  look and the feel of cold wind  down a street at night.   Gritty for its time as  film began to get more explicit  in violence.  Well worth seeing anytime.  Especially night with the lights low.